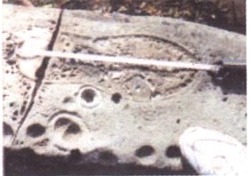 This photo was taken in northern Washington state and was reportedly found with another partial imprint. It appears to be the shoeprint of a large individual (see man’s shoe in lower left of photo for comparison)approximately 16 inches long from heel to toe. Giant Shoeprint Giant Shoeprint

There remains the possibilty of course that someone painstakingly chiseled out two convincing shoeprints in recent times and left them on a mountain.