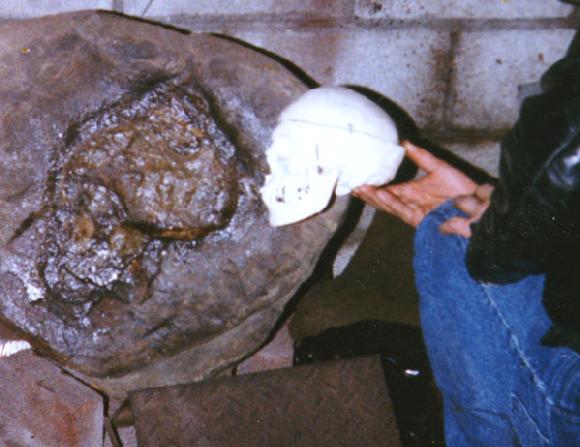 The Human Skull in Ancient Rock

“Physical evidence currently exists that proves man inhabited the earth while coal was being formed, shaking the very foundations of who we really are and how we really got here. An assortment of human bones and soft organs, transformed to rock-like hardness, has been discovered between anthracite veins in Pennsylvania. Skull In Stone

Since one of the golden rules of geology is that coal was formed during the Carboniferous — a minimum of 280 million years ago — it means that man has existed multi-millions of years before the … insectivore from whom the evolutionists claim we eventually evolved. Skull In Stone

However, the scientific establishment has wielded its powerful disdainful influence — deceit, dishonesty, collusion and conspiracy — to prevent evidence of the most important discovery of the 20th century to be documented as fact and, therefore, keep us from learning a monumental truth about ourselves.” …Ed Conrad Skull In Stone

These stories have been around for more than 10 years, the Ed Conrad discoveries have been silent. There are no new discoveries that have been reported to my knowledge. It would be of great interest of the Greater Ancestors World Museum to get latex molds of  Ed Conrads artifacts. These important items should be enjoyed by the general public. We would like to study the items in adjacent to similar items that exist in the museum currently, if you can help with this matter please contact me by email at greaterancestors@yahoo.com.