‘Giant Penguins’ The largest Penguins ever 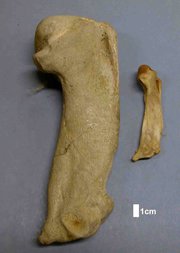 Greater ancestor of penguins on the left, and the weaker descendant on the right.

Giant Penguins? What was the biggest penguin ever? . . . .  Today, the largest penguin is the Emperor Penguin.  That species measures about 3 feet tall, when standing with its feet flat and it head at resting posture.

We already know that some extinct penguins got much bigger.  But, paleontologists are not certain which was the largest ever. Two contenders are:

The scientific names of these penguins reference their mighty stature.

“Anthropornis translates to “man bird” and Pachydyptes to “stout diver”.   Sadly, only isolated bones have been found from the two species.

Yet there is no denying they were tremendous birds – compare the major wing bone of Pachydyptes to a typical penguin.

ompared to the humerus of a typical living penguin.

Extrapolating the total size of an extinct animal from a few bones is a  real challenge.

Despite the impressive size of the bones we have found so far, it is not even clear whether either of them was the biggest penguin of all time.

. . . . there is a lot of uncertainty. For example, if we compare the wing bones of Pachydyptes to an Emperor penguin, they are about 35% longer but almost twice as thick.  It gets even more complicated when we see that the shoulder girdle bones are only slightly longer but also a different shape.  So we can’t just scale directly – we need to find a complete skeleton to truly understand what is going on. Even amongst living penguin species the relative proportions of the beak, legs, flippers and trunk vary fairly widely and fossil penguins do not always fall even within that range.  Was Anthropornis taller because it was perched on long, slender limbs?  Was Pachydyptes ridiculously short-necked with thick, short legs?  Dimensions from the bones we have give us some clues as to standing height of the largest penguins, but without the hindlimb, pelvis and vertebral column there is always going to be a wide range of error.

Still, we can get to a ballpark total. George Simpson did some back-of-the-envelope equations back in 1946 and put the tallest penguins at around 5 feet tall.

Simpson’s (1946) line-up of penguins showing the rough size of the largest fossil species (B), some more modest fossil species (C,E) and the living Emperor Penguin (D) and Galapagos Penguin (F). As noted by Simpson (1946), these are not meant to be exact reconstructions of particular fossil species, but rather to give an idea of scale.

Weight is a separate issue from height.  Personally, I have little doubt that Pachydyptes was the heaviest fossil penguin (at least the heaviest discovered so far).  The wing bones are just so wide compared to other similarly sized species that the animal, from little we know of it, appears to have been extremely stocky.  Imagine the Chicago Bears defensive lineman William “The Refridgerator” Perry with flippers.  Piotr Jadwiszczak used regression equations relating the limb bone proportions of living penguins to mass, and estimated the largest species would tip the scales at over 170 pounds.  Another rough estimate for the present, but nonetheless evocative. Pack this mass into a 5 foot frame and you have penguin that could bowl over pretty much anything in its way.

So the answer to the opening question is – we don’t know what the biggest penguin species is, or exactly how big it got.

It’s one more question about extinct birds we can seek an answer to by continuing to search for new fossils and better methods of reconstructing total mass from the dimensions of individual bones.

This post is dedicated to profiling one of the most impressive fossil penguins yet discovered: Icadyptes salasi – a giant, spear-beaked penguin from the Eocene.

Peruvian paleontologists discovered the first Icadyptes specimen in marine sediments from the Otuma Formation, deposited about 36 million years ago.  The name “Icadyptes” refers to the Department of Ica, the Peruvian state where the fossil was found and “salasi” honors Rodolfo Salas, a renowned Peruvian paleontologist.  Tiny shells from pelagic planktonic organisms and scales from fish related to anchovies and sardines show us that this penguin was buried in relatively deep waters off the ancient shoreline of Peru.  The penguin may have been foraging for prey when it died, or the carcass could have drifted out from shallower waters and then sank to the bottom. Because the bones are beautifully preserved and many still connected as in life, there was probably not a very long interval between death and burial.

For a long time, paleontologists have known at least some fossil penguins had long, strongly built beaks quite distinct from the generally stubby bill of most living species.  Bits and pieces of penguin skulls had been recovered from rocks in Antarctica, New Zealand and South America.  Icadyptes is important because it provides the first complete example of one of these spear-beaked penguin skulls.  Penguin bones are pretty resistant to destruction compared to typical birds bones, because they are extremely solid (unlike the hollow bones of “normal” birds like gulls or pigeons).  This has resulted in thousands of penguin bones making it into the fossil record.  But most of these bones are from the flipper or hindlimb – more delicate parts of the skeleton such as the skull and the sternum (breastbone) are frequently lost even in the best-preserved specimens.  So until Icadyptes was discovered, we had little idea what the skull of a giant penguin looked like.

Incredible might be the best word to describe it.  The beak is remarkably long, making up nearly two-thirds of the skull.  In terms of construction, it really is more like a spear than a modern penguin beak.

Many of the skull bones that remain separate in living penguins – such as parts of the premaxillae and palatines – are fused together into a solid structure.  Rather than having a hooked tip like the beak of modern penguins, the beak ended in a point.  Finally, the texture of the beak suggests the soft tissue overlying the bone was of a different form than modern penguins.

Today’s penguins have a very thick outer coating – the rhamphotheca, that covers their beaks.  This makes the beak thicker than would be obvious from the bony portion alone.  Icadyptes has unusual texturing on the bony beak, a network of shallow grooves for the blood vessels that nutrify the rhamphotheca.

Together, all of these features strongly indicate a unique feeding strategy for Icadyptes.

Storrs Olson and Andrzeg Myrcha hypothesized that giant penguins probably fed by spearing prey, rather than capturing prey between the upper and lower jaws.  Icadyptes supports this idea – this penguin surely struck fear into Eocene fish and squid.

One final revelation from the Icadyptes holotype specimen is that although the beak was very long,

the skull as a whole was disproportionately small compared to the total body size.  (Microcephalus)

Because the hindlimbs and most of the vertebrae are missing, it is impossible to precisely reconstruct the total size of Icandyptes.  We do now, however, that it was far larger than even the Emperor Penguin, probably close to 5 feet standing higher and significantly heavier than a similar sized human.

Skull length is easily outstips that of even the largest living penguins, but the difference between the flipper bones is even greater.

With the small head atop the bulky body,

Icadyptes probably looked like a linebacker penguin without its helmet.”

I think the size of the bones and the difference between the greater ancestor and the weaker descendant are immense. Its almost unbelievable if you follow the evolutionary cone of increasing diversification. In this article an important thing is the honesty in the statements concerning the microcephalus ration of

For all you penguin phanatics. ENJOY‘