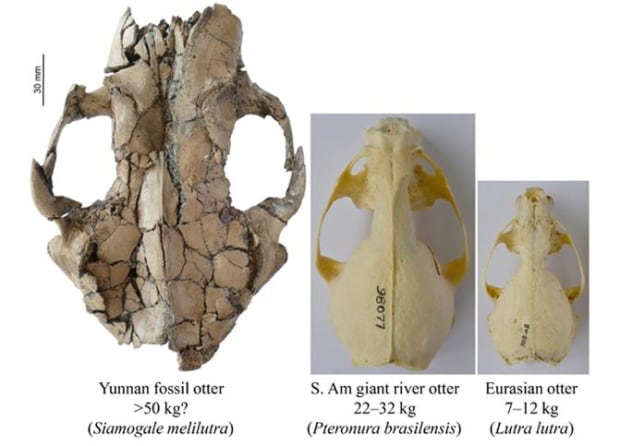 Paleontologists have unearthed fossils of an intriguingly large otter as big as a wolf. With “wolf-like” proportions, and weighing 110 Ibs, the creature — whose skull was excavated in Yunnan province — would have been twice the size of today’s otters.

The Greater otter, called Siamogale melilutra, weighed about 110 pounds and measured up to 6-1/2 feet long, making it bigger than any descendants alive today.

“Siamogale melilutra, Who would have imagined a wolf-size otter?” said Denise Su, Cleveland Museum of Natural History curator of paleobotany and paleoecology. We at Greater Anestors would.

These hulking otters of yore would have fed on large shellfish, crushed between their powerful jaws. It had enlarged cheek teeth and strong jaws that appear to have been used for crunching hard objects, perhaps large shellfish and freshwater mollusks, and was capable of swimming in shallow, swampy waters.

“I think it used its powerful jaws to crush hard clams for food, . . . like modern sea otters, ” said Xiaoming Wang, head of vertebrate paleontology at the Natural History Museum of Los Angeles County.

A comparison of the newly found skull together with other known species of otter. (Denise Su/Cleveland Museum of Natural History)

The fossils, found at a site in China’s Yunnan Province, include a largely complete cranium and lower jaw, various teeth, and limb bones.

The skull was crushed eons ago during the fossilization process. The researchers used sophisticated scanning to digitally reconstruct it. . .

The largest otter alive today is the South American giant river otter, weighing up to about 70 pounds. Otters have been placed into a mammalian family including the weasel, badger, marten and mink.  But otter evolution is not well understood, (you can say that again) with fossils rare and scattered around the world.

Siamogale melilutra may not be the largest otter ever, with fossils of another one that may be the biggest previously found in Africa. But why it’s so big? We just don’t know – that’s a big question for further study,” Ji said. (We know, . . .declining maturity)

This is definately not the first giant otter I have seen, there actually are many others to cap off the heightened greater ancestry of each Kind from different local. The reason for the confusion by many of the museum curators and paleontologists is because they are operating on a failed pantheistic model through evolutionism that doesnt fit reality, current fauna nor the fossil record.