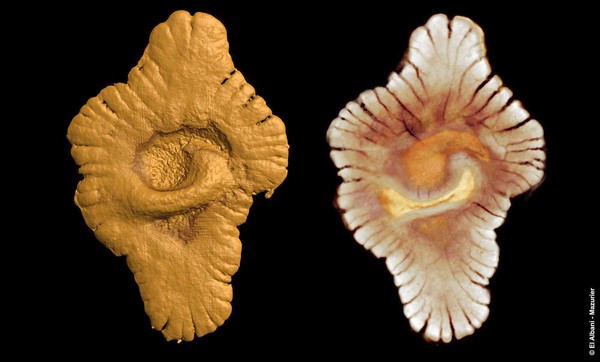 An international team of paleontologists has uncovered the earliest known multicellular fossils,( This fossil by the pantheist time-scale is 200million years before where it should be) The layer this fossil was found in, was  designated as 2.1 billion years old. (which is wrong)

“Since most fossils in that period were microscopic and single-celled, finding fossils that stretched as long as

thick-crust pizza turning up,” said Philip Donoghue, a paleontologist at the University of Bristol, who co-wrote a commentary on the finding. The report detailing the fossils, along with the commentary, was published online Wednesday in the journal Nature. (a pantheist subscription)

“I was astonished…. It’s not the sort of thing you expect to see in rocks of that age,” Donoghue said.

Paleontologist Abderrazak El Albani, the report’s lead author, said the macroscopic fossils, which are visible to the naked eye, turned up at a point during the Paleoproterozoic era when life was thought to exist on a purely microbial level.

“a precambrian rabbit” so to speak.

Here is a quote: “”The evolution of the Gabon macrofossils, representing an early step toward large-sized multicellularity, may have become possible by the first boost in oxygen,” Dr El Albani and colleagues said in a statement, “whereas the Cambrian Explosion could have been fuelled by the second.” Again evolutionism has added another element to  supernaturalism a just- so story of the an oxygen surge called the “great oxidation”.

The fossils were found to contain tiny grains of pyrite, or fool’s gold.