Giant in a vault, Jackson County

Discovery of a Mysterious Vault

Jackson, Ohio, February 21. Our village is full of wonder and excitement. Martin Marker. J. W. Hughes, and Washington Long, in digging a grave in the cemetery near this village, about ten o’clock this morning, came to a large flat stone about four feet below the surface, which sto

pped their further progress, until they procured assistance and removed the stone from its resting place of ages, when it was found to have closed the entrance to a subterranean vault. –

All efforts thus far (3 P. M.) to enter it with a light have proved unsuccessful, on account of the foul air with which it is filled. By means of a rake, human bones of a gigantic size have been raised, and a small chant of silver, the coins attached to each end. The coins though much defaced over time, have the appearance of those used among the Romans in the days of Scipio Africanus, though there were evident traces of heiroglyphic devices that cannot be deciphered.

The men at the cemetery have by means of burning straw, made light in the vault, and, though none have the courage to enter further than the entrance, it has been discovered that there is, immediately to the west of the opening, a chamber of about ten feet square, with steps quite dilapidated down its eastern side. Three other chambers branch out of this; one to the north, one to the south, and the other to the west.

We are all curious, of course to know when and by whom these vaults were made and filled. Rev. Mr. Hunter, and . . . (this article is a stub) 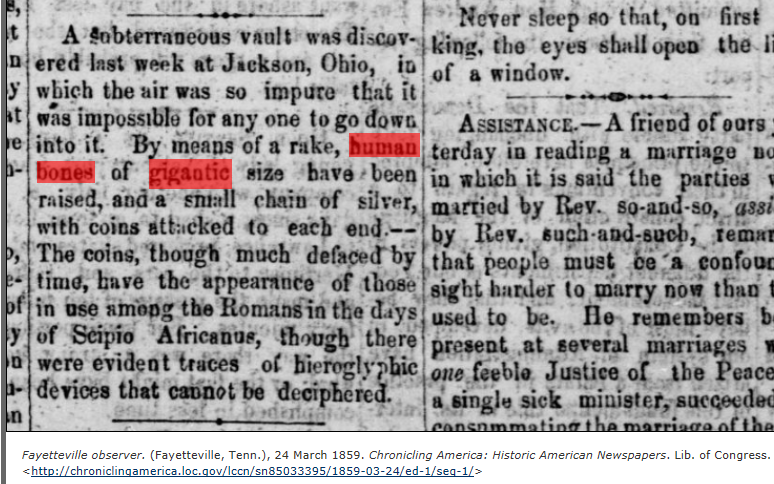 A subterranean Vault was discovered last week in Jackson, Ohio, in which the air was so impure that it was impossible for any one to go down into it. By means of a rake, human bones of Gigantic size have been raised, and a small chain of silver, with coins attached to each end. – – The coins, though much defaced by time, have

the appearance of those in use among the Romans in the day of Scipio Africanus, though there were evident traces of heiroglyphic devices that cannot be deciphered.