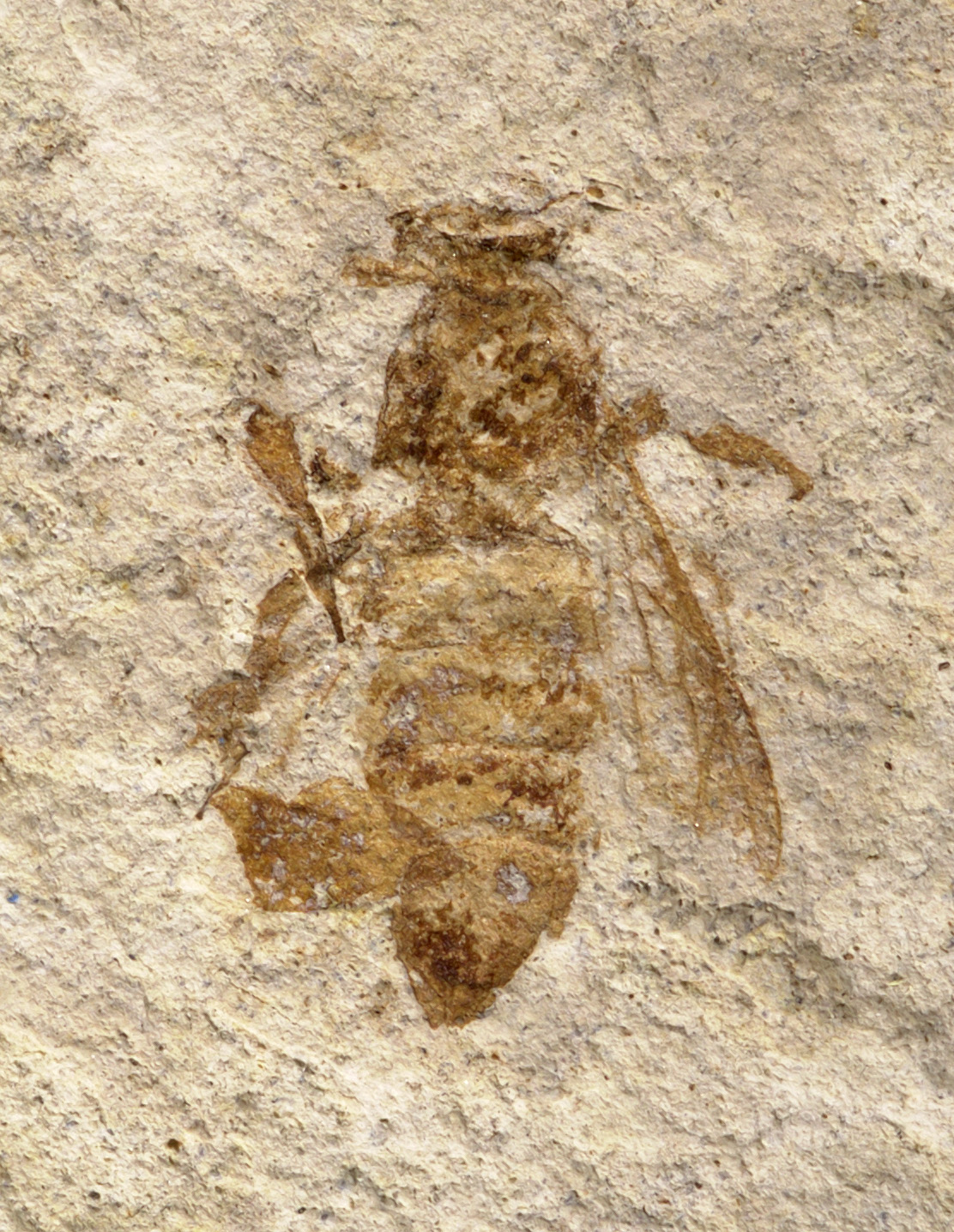 Bees are loved for their honey and feared for their sting. However, KU scientists get a different message from the famous insects.
Matt Doubrava takes a closer look at what the ancient insect has to say. . . .

A recently discovered fossil reveals the largest ancient honey bee to date. It is compared to the modern “giant honey bee,” which is twice the size of the common European honey bee and can grow up to an inch in length. The fossil, which is 19 million years old, was found on the Japanese Iki Island and sent to Michael Engel, an entomology professor and museum curator at the University of Kansas.

The giant honey bee does not currently inhabit that area.
Fossil of a “giant honey bee” found in Iki Island, Japan. KU Entomologist Michael Engel interpreted the fossil as being over 19 million years old.
. . . .

“Giant honey bees once had a wider distribution but are more restricted today because of the contraction of the tropical zone.”

The giant honey bee, according to Engel, is entirely tropical. Its habitat today includes southeast Asia, throughout India and Indonesia. However, this fossil was discovered in a temperate zone in Japan. This suggests that the Japan area may have been a more tropical environment. . .

Ismael Hinojosa-Diaz, a KU graduate student in entomology and bee expert, said that scientists can use fossils like this to determine what kind of environment certain areas had. The study of paleoclimatology is studying climates that existed before . . . . Studying the placement of fossils allows scientists to observe ancient climate trends.

“Species that were adapted to the cold took advantage,” Hinojosa-Diaz said of the steady drop in temperature that took place during this period. “Species that needed a tropical environment were contracted into smaller areas.

Diaz said that in order for this bee to have lived in Japan, the temperature and flora of the region had to be much different than it is today. It would have had to be humid, with a tropical jungle landscape.

Unlike the European honey bee, giant honey bees do not build their nests in hollowed-out, decaying places such as tree trunks. Their nests are high in branches in treetops and are completely exposed to the outside.It is external forces like climate change that led and will continue to lead to variations in species. A species that lives in a wide area can get separated from the rest of its kind when the temperature zone contracts. When this happens, the species splits into fragments and begins to reproduce in its own division.

If cold weather does affect the size of animal species we should see this trend in all animals today, yet some of the largest animals giraffes, hippos, and elephants would be very small indeed. We can reproduce a cold environment you would think cattle growers would leave Texas for Alaska. External factors result in phenotypical changes (changes in a lifetime) that do not get passed on, the answer lies in the genetics.