Giant Gavial, The Largest Yet. 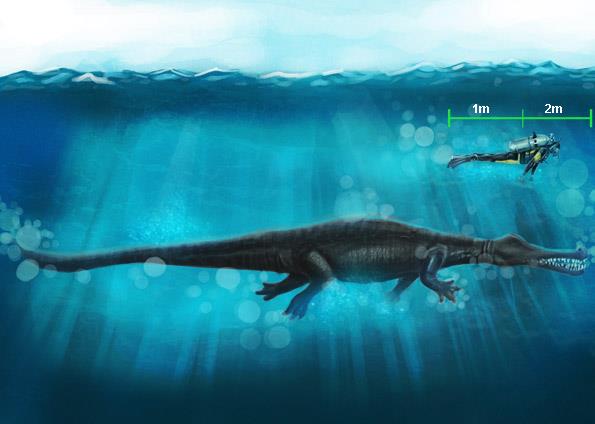 Brazilian and Venezuelan find supercrocodilo extinguished with more than 10

Creature is part of the GAVI, tapered muzzle, which survives only in Asia.

No alligators or crocodiles alive today would be no match for the Gryposuchus Croizat ,

a prehistoric monster of over 10 m long and nearly two tons.

This Giant Gavial: The animal, one of the largest crocodilians of all time,

Size of the animal near an unsuspecting human diver (Photo: Editorial Art G1)

Technically, the reptile in question is a gharial – a form of crocodilian weirdo with the thin and elongated snout, which still exists in India and neighboring countries.

“All are equal teeth, a characteristic that is associated with fish consumption,” explains Douglas Riff, a researcher at the Department of Natural Sciences, State University of Southwest Bahia and one responsible for the description….

Riff and his Venezuelan counterpart Orangel Aguilera, National Experimental University of Francisco de Miranda, the monster just presented to the scientific community in an article in German magazine “Zeitschrift Paläontologische.” The creature was found in the call Urumaco formation, a geological layer of northwestern Venezuela. . . .

. Apparently, the animal lived in a coastal environment, with grasslands, freshwater rivers and the sea just around the corner.