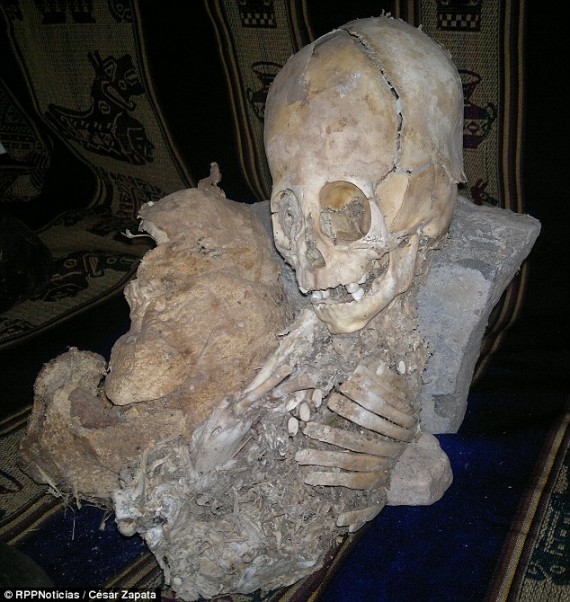 Mummy With A Giant Elongated Skull Found In Peru,

A mummified humanoid human with a big, oddly shaped skull was found in Peru. The creature’s head, being almost as big as its body, amazed anthropologists, who at first thought that it was a [deformed] child but then realized that the skull also has two large molars, which can only be found in adult humans. The archaeologists agreed:

A mummified elongated skull found in Peru could finally prove the existence of . . .(A Nephilim Child).

The strangely shaped head – almost as big as its 50cm (20in) body – has baffled anthropologists.

It was one of two sets of remains found in the city of Andahuaylillas in the southern province of Quispicanchi.

The skeletal sets were discovered by Renato Davila Riquelme, who works for the Privado Ritos Andinos museum in Cusco in south-eastern Peru.

He said that that the eye cavities are far larger than normally seen in humans.

There is a soft spot in the skull – called an open fontanelle – which is a characteristic of children in their first year of life, yet the skull also has two large molars, only found in much older humans.

Davila Riquelme said three anthropologists, from Spain and Russia, arrived at the museum last week to investigate the findings and agreed it was ‘not a human being’ and would conduct further studies.

He added: ‘Although the assessment was superficial, it is obvious that its features do not correspond to any ethnic group in the world.’

The remains of an eyeball in the right socket will help determine its genetic DNA – and clear up the controversy if it is human or not.

The second mummy is incomplete and is only 30cm (12in).

It lacks a face and seems to be wrapped in a layer as a placenta, fetal position.

It is worth mentioning that this is not the first skull of this kind ever found, the star child skull is another similar, although incomplete cranium, discovered in Mexico. . . .

Visit dailymail.co.uk to view the original article and watch a couple more photos.
Is this an alien skull? Mystery of giant-headed mummy found in Peru

While you read, I will be taking photographs of my neighbor’s abnormally large head and submitting them to the UFO magazine.