I wanted to credit the FIRST article that broke the story of a 15″ Giant Egyptian Finger, so here is the original article by BILD.de verbatim:

BILD.de exclusive photos shows the secret of spooky finger from Egypt
Was one of the puzzling finding a giant creature? Giant Egyptian Finger. 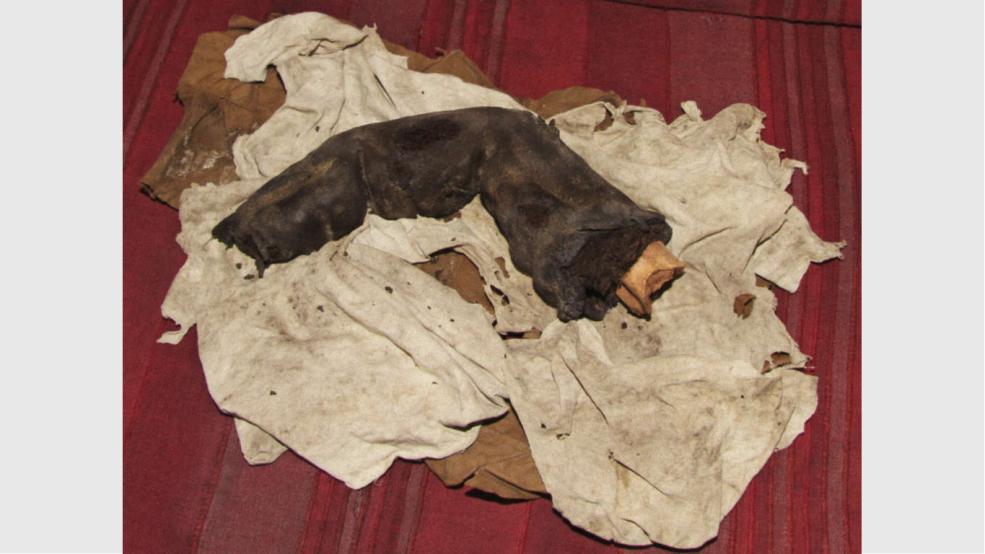 To whom does the monster finger?
The mummified bones found looks as if it had been chopped off with an ax

Cairo / Basel – What on earth is THAT? In the photo you can see a giant creepy fingers. You will recognize it almost immediately, but it must still look twice. Seems to be chopped off the bone. As of an ax. And very, very old. Mummified. Here and crumbles. Torn, leathery skin. A divided, loose nail. Yes, indeed, the gruesome relic seems to be a finger. But huge, 38 inches long. What’s the secret behind this?

BILD.de tells the story of a strange discovery in Egypt.

Very few people have the finger photos ever seen, which were recorded in 1988 in the land of pharaohs and pyramids. BILD.de it shows for the first time and exclusively in Germany. 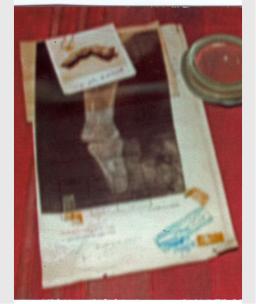 With an X-ray image and a certificate confirming the authenticity of the relic
Photo: Gregory Spörri

A mystical, magical place: the Pyramids of Giza in Egypt

The photographer Gregory Spörri (56), a well-known disco entrepreneur from Basel in Switzerland. His empire included the “Mad Max”, a cult shop where the stars of FC Basel celebrated, but David Beckham and Stephanie of Monaco. His second passion that changed his life: Egypt!
Enlarge The Pyramids of Giza in Egypt are like a magical-mystical place a mystical and magical place: the Pyramids of Giza in Egypt
Photo: AP

On the last day of his private investigator-leave he got 1988 Contact to an old man from a grave robber dynasty. About 100 kilometers northeast of Cairo was the meeting place in a farm house in Bir Hooker. Against $ 300 Spörri could take a look at the unsold family treasure of the grave robber.

Wrapped in old rags, bone and leather skin. Spörri to BILD.de: “It was an oblong package, smelled musty. I was absolutely flabbergasted when I saw the dark brown relic, it was allowed to take in hand and also photograph, next to put a bill to get a size comparison. “The bent finger was split open and covered with dried mold. “It was surprisingly easy, maybe a few hundred grams My heart pounding. That was amazing. In terms of size a matching body should have been about five feet tall … ”

The grave robber showed the Swiss also have a Certificate of Authenticity and an X-ray image. Both are from the 60s. “The grave robbers all swore by Allah. But to sell the finger was not. He appeared to be him and his family much too important … ”

Today Spörri regretted that he then only with the photos flew home. For years it occupied the Fund. Scientists were not interested in the Fund, which should be impossible. “The Relic does not fit into their theories”, the discoverer says to BILD.de. He did not want to make a mockery of the experts and rested the story. In 2009 he went back to the search for the ancient Arabs and the relic. But the traces in Bir Hooker had fizzled …

There were giants in Egypt? The Roman historian Flavius Josephus reported 79 AD of such beings in the history of the Jewish War, “There were giants. Much larger and differently than normal people. Horrible to look at. Who has not seen with his own eyes, he can not believe that they have been so enormous. ”

All theory. Fact: The bones found still missing. “Disco King” Spörri decided in 2008 to a new life, gave up his profession, processed the mysterious discovery in his latest book, “The Lost God. Day of Doom, “a mystery thriller in which showed the relic and a fictional story is told to solve the mystery of the supposedly more. The reality is different: “I’m not a scientist,” the author says honestly. “I have installed the relic in the novel to make it deliberately to deprive of science. The reader should look at the thing itself, and now form their own opinion. ”

Maybe soon finds himself still a new lane of horror finger. And experts who want to investigate the history and solve the mystery of Bir Hooker … 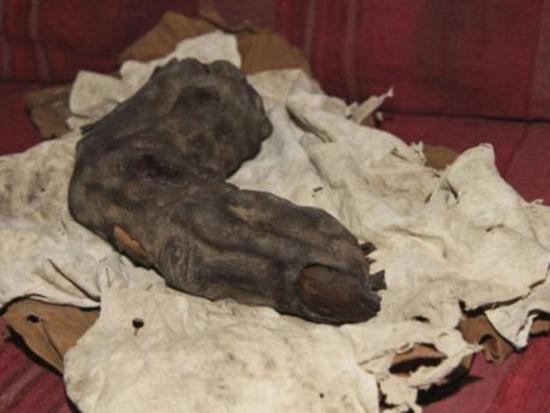 A 15 inch long human finger has been found in Egypt and . . . it is spreading like fire all over the Internet.  . .

The mummified finger would be considered to be human

except for the fact that it is way, way too large to have come from a human hand. . .  It is projected that the person that this finger came from would have been more than 16 feet tall!   As you can tell from the picture above, the fingernail is clearly visible.  This truly is a remarkable specimen.  So is this really a finger of a giant that once lived in Egypt?

(Gratefuly), this finger is not housed in a museum in Egypt.  The researcher that took the pictures reportedly had to pay “an old man from a grave robber dynasty” 300 dollars to see it and take pictures of it. . .

It (is) be a direct challenge to everything that is commonly accepted about the ancient history of Egypt. Right now we do not know enough about this finger to confirm its authenticity.

There is no reason to rule its existence out until more is known. I personally would like to get a replica of this finger for the Greater Ancestors World Museum. If anyone can get a replica of this finger from a mold, or any other giant evidences contact me via email at greaterancestors.yahoo.com. I take no stance on these extreme heights obviously this is outside the shrinking capabilities (i would expect) of any devolution mechanisms, and would warrant a study into what would be the “Great Giants” or “Great Nephilim”.