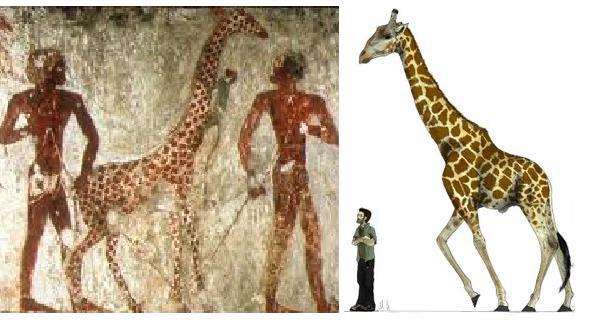 Giraffes, like all species, when young have a larger head to body ratio. Large heads are an indication of youth but as you can see the giraffe  have even smaller head to body (microcephalus) which would indicate that they are not only mature, but they might be more mature, and therefore larger than todays  giraffes.

The modern giraffe is Illustrated, and is illustrated as an adult, and not an infant in this ancient relief.

You can see in the modern human-male compared to a modern Giraffe on the right, and a giant humanoid compared to an even more mature giraffe which would be justified in being made larger than the modern giraffe. But for the sake of comparing the humanoids the giraffes are of a similar height.

Conclusion: The artist intended to illustrate that some of the inhabitants of Egypt were indeed Giants, and depicted them with mature giraffes to illustrate what the artist (who is a visual person) saw giant humans before his own eyes.