Photo: Francisco Firmino/Irauçuba News
BRAZIL, CEARA state. At a place named São Francisco das Almas, Juá district, at the city of Irauçuba, distant 150 km from Fortaleza, capital of the state of Ceara (northeast of the country), two men, while were digging a pit, they found a enormous bone that belonged to a creature of the megafauna that lived at Brazil there, . . .
These giant animals dominated the Earth . . .
. . . the fossil – which was buried to a depth of 4 meters, is of a giant armadillo (in the brazilian portuguese language, the armadillo is called Tatu).
The Megafauna at Brazil reunited several species. One of these was the Pampatherium, the giant armadillo. With the size of a donkey, but much more robust, weighing about 100 to 200 kg, its shell had three ranges. 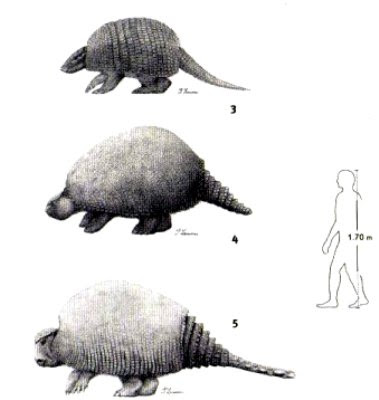 3 – Pampatherium  4 – Glyptodon  5 – Panochthus. In comparative illustration, the dimensions of a Pampatherium confronted with the size of its relatives of the Megafauna and a man of medium height.. IMAGE SOURCE: [http://forum.zoologist.ru/viewtopic.php?pid=94820]
Different of the current armadillos, which are insectivorous, ants eaters, the Pampatherium was a herbivorous was not a digger of the soil . . .  The Pampatherium belongs to the family of the Dasypodideos (armadillos). The specie found in San Francisco das Almas is called Pampatherium humboldti.
SOURCE: XEREZ, Gloria. Homem cava poço e encontra osso gigante de animal extinto no Ceará.
[http://g1.globo.com/ceara/noticia/2012/09/homem-cava-poco-e-encontra-osso-gigante-de-animal-extinto-no-ceara.html]