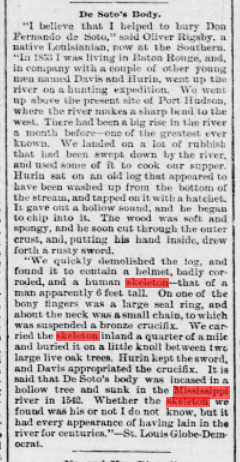 “I believe that I helped to bury Don Fernando Desoto,” said Oliver Rigsby, a native

Louisianian, now at the Southern,

“In 1853 i was living in Baton Rouge, and, in company with a couple of other young men named Davis and Hurie, went up the river on a hunting expedition. We wnt up above the present site f Fort Hud

son, where the river takes a sharp bend to the west. There had been a big rise in the river a month before- one of the greatest ever known, we had landed on a lot of rubbish that had been swept down by the river, and used some of it to co

ok for our supper. Hurie sat on an old log that had appeared to have been washed up from the bottom of the stream, and tapped on it with a hatchet. It gave out a hollow sound and he begun to chip into it. The wood was soft and spongy, and he soon cut through the outer crust, and putting his hand inside drew forth a rusty sword.

“We quickly demolished the log, and found it to contain a helmet badly corroded, and a human skeleton-that of a man apparently six feet tall. On one of the bony fingers was a large seal ring, and about the neck was a small chain, to which was suspended a bronze crucifix. We carried the skeleton inland a quarter of a mile and buried it on a little knoll between two large live oak trees. Hurin kept the sword and Davis appropriated the crucifix. It is said that DeSoto’s body was incased in a hollow tree and sank in the Mississippi River in 1542. Whether the skeleton we found was his or not i do not know, but it had every appearance of having lain in the river for cenuries,”

De Soto saw many of the giant mound-builders and the extraordinary size of the Indian chieftains. It has been stated over and over and generally assumed that because of this De Soto claimed to be of short stature, thus diminishing the tale of giants seen by De Soto. Tuskaloosa was described as a head and a half taller than De Soto and his men. The accepted byt unverified modern tale circulating is that Hernando De Soto was 5 foot 5-6 inches and Tuskaloosa must have been 7 foot.

In this story we find out that Hernando De Soto’s Skeleton puts him at 6 feet. Given that skeletons shrink up to 3 inches, this makes De Soto 6 foot 3 inches. This puts Tuskaloosa at about 8 foot tall, because Desoto and his men wore helmets the description might have made Tuskaloosa taller still.