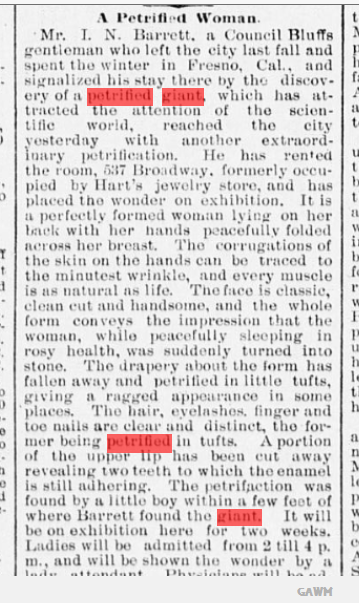 Mr. I.N. Barret, a Council Bluffs gentleman who left the city last fall and spent the winter in Fresno, Cal., and signalized his stay there by the discovery of a petrified giant, which has attracted the attention of the scientific world, reached the city yesterday with another extraordinary petrification. He has rented the room, 537 Broadway, formerly occupied by Hart’s jewelry store, and has placed the wonder on exhibition. It is a perfectly formed woman lying on her back with her hands peacefully folded across her breast. The corrugations of the skin on the hands can be traced to the minutest wrinkle, and every muscle is as natural as life. The face is classic, clean-cut and handsome, and the whole form conveys the impression that the woman, while peacefully sleeping in rosy health, was suddenly turned into stone. The drapery about the form has fallen away and petrified in little tufts, giving a ragged appearance in some places. The hair, eyelashes, finger and toe nails are clear and distinct, the former being petrified in tufts. A portion of the upper lip has been cut away revealing two teethto which the enamel is still adhering. The petrification was found by a little boy within a few feet of where Barrett found the giant. It will be on exhibition here for two weeks.

Thanks to Andrew Owens for the corrections.