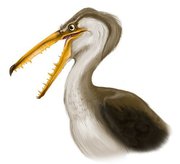 A Giant Albatross over 4 feet in height with a 17 foot wingspan.

A fossil recently uncovered in Chile has been identified as an albatross-like seabird with a 17-foot wingspan. That compares with eight feet for a bald eagle and 11 and one-half feet for the largest living albatross. The skeleton was about 70 percent complete, reported Catherine Zuckerman for National Geographic in the April issue, and has been named Pelagornis chilensis by scientists. The story, with a photo of the fossil and a drawing of the feathered bird, said the huge flyer “…had a beak full of spiky bone protrusions resembling teeth—likely used for snatching slippery ocean prey.”

“The giant Albatross had greater longevity and mature physical characteristics, while the modern version demonstrated neotony traits. The modern albatross does not reach a level of maturity to develop teeth and are suspended in a state of lesser maturity.”