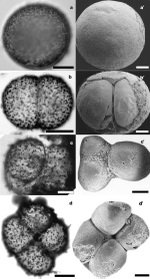 Embryos? Bacteria? The four images on the left are light micrographs of modern Thiomargarita cells, the four on the right are SEM images of sample fossils. from Macmillan Publishers Ltd: Nature 2007; 445:198-201 copyright 2007

Embryos? Bacteria? The four images on the left are light micrographs of modern Thiomargarita cells, the four on the right are SEM images of sample fossils. from Macmillan Publishers Ltd: Nature 2007; 445:198-201 copyright 2007

When is an egg not an egg? When it is a giant bacterium. Fancy that.

The story begins in 1998, when egg- and embryo-like structures were found in great abundance in 580 million year old calcium phosphate rocks in China. This announcement caused great excitement , . . .

The abundant “globular objects” were interpreted to be very early fossils of eggs or embryos.

This was consistent with their large size, nearly 1 millimeter across—appropriate for early developmental stages of animals.

This notion was further bolstered when researchers described cellular structures (vacuoles, nuclei) within them. Strikingly, “embryos” were found that looked like modern embryos caught at the 2-cell, 4-cell, 8-cell, and later stages. This was most convincing since this pattern of reductive cell division had been known to occur in cells of that size only in animals. (This type of cell division is called “reductive” because the total mass of the cluster of cells remains constant, and thus the size of each member cell is reduced.)

This interpretation has now been disputed in a paper that proposes that many of these little balls may not be animals at all, but rather are giant bacteria. The authors make the case that these fossils are similar to the celebrated Thiomargarita, the Gargantuan bacterium discovered not long ago in the waters of Namibia and Mexico. Their case rests on both positive evidence and negative assertions.

They cite the disproportionate number of “eggs” and the absence of specimens in more advanced stages of development. Their morphological studies demonstrate striking similarities between selected specimens of the living bacteria and the fossils. Furthermore, present-day Thiomargarita participates in a complex phosphorus cycle that leads to the formation of insoluble phosphate-containing compounds such as hydroxyapatite, thus providing a biogeochemical explanation for the formation of these unusual fossil-containing deposits. The authors are careful to point out that they are not claiming that all the fossils are giant bacteria. There’s room for other things as well.

Is this the last word on the subject? Surely not. Happily, we can anticipate further research and discussion as to the identity of these intriguing little balls. Ancient fossil animals or giant fossil bacteria? Either way, we can’t lose. Both are fascinating and illuminating.

A coda: As a graduate student and beyond, I was surrounded by biochemists and molecular biologists, most of whom had little use for the shapes and forms of life (except, perhaps, those of their molecules). I felt otherwise then, and I rejoice now to see morphology, once again, rear its proud head.

Posted at 06:29 AM in Evolution, Teachers Corner: