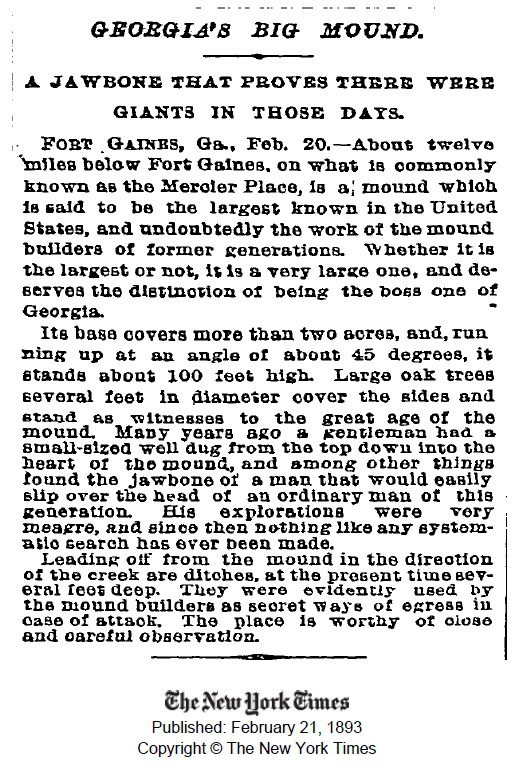 A JAWBONE THAT PROVES THERE WERE GIANTS IN THOSE DAYS.

FORT GAINES, Ga., Feb. 20.-About twelve miles below Fort Gaines, on what is commonly known as the Mercier Place, is a mound which is said to be the largest known in the United States, and undoubtedly the work of the mound builders of former generations. Whether it is the largest or not, it is a very large one, and deserves the distinction of being the best one of Georgia.

Its base covers more than two acres, and, running up at an angle of about 45 degrees, it stands about 100 feet high. Large oak trees several feet in diameter cover the sides and stand as witness to the great age of the mound. Many years ago a gentleman had a small-sized well dug from the top down into the heart of the mound, and among other things found the jawbone of a man of this generation. His explorations were very meagre, and since then nothing like any systematic search has ever been made.

Leading off from the mound in the direction of the creek are ditches, at the present time several feet deep. They were evidently used by the mound builders as secret ways of egress in case of attack. The place is worthy of close and careful  observation.