Megan Trotter footprint tennessee
Herald-Citizen Staff
Saturday, Aug 30, 2008
Harold Jackson of Cookeville measures a mysterious footprint he found near the Caney Fork River.
“(My friend said) ‘That looks like a footprint.’ I had seen it before, but I didn’t think anything about it,” said Jackson. “But then when my friend said that, I got to looking at it, and sure enough, (I thought), ‘It’s got to be a footprint.'”

Jackson pried the fossilized print up from the surrounding rock and brought it home. As he rinsed off the mud, he was impressed at the detail in the impression. Not only was the outline of the foot clear, but also the impression of the toes, the heal and the ball of the foot. Looking at it from the side, he could see where the weight of the walker had pressed the now hardened mud tightly together directly under the print, whereas the fossilized mud down deeper was not as closely packed.

After studying it closely, Jackson is still unsure of what the footprint is from, but whatever it was, it was big.

One of his theories is that the print might have come from a Native American. In the area where he found the print, he has found many artifacts such as arrow heads, ancient tools and even cave paintings.

“But if this was an Indian, he was a very big Indian,” said Jackson.

Another theory is that it is from some kind of animal, though Jackson has no ideas as to what kind of animal it might be. The print itself appears human except for something that looks like a claw mark near the heal. Jackson suggests it might be something like a dewclaw, an undeveloped claw or digit commonly found on mammals such as dogs, cattle and deer.

However, the print is clearly not from any of these animals. 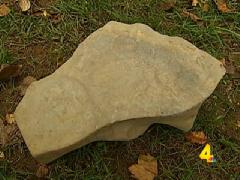 “This kind-of makes me believe in Bigfoot,” said Jackson.

In a recent trip back to the site where the print came from, Jackson came across what he believes may be the print of the right foot. This one is fossilized in a much larger rock – one Jackson is unable to pull out. So for now it remains where he found it.

Jackson plans to keep the footprint that he was able to pull up, however he is willing to let scientists study it.

“I’m not wanting any credit or anything for it. I just found it and thought it might be interesting to the people to see this,” he said. “I’ve never seen anything like it.”