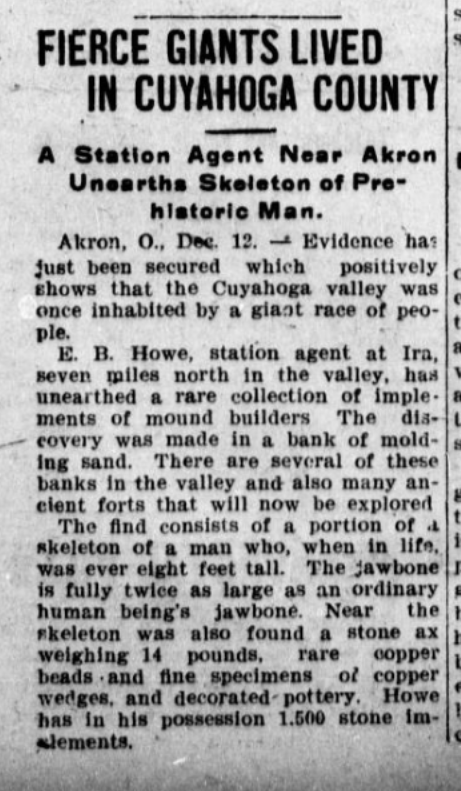 A Station Agent Near Akron Unearths Skeleton of Prehistoric Man.

Akron Ohio, December 12. Evidence has just been secured which positively shows that the Cuyahoga valley was once inhabited by a giant race of people. B. Howe, station agent at Ira, seven miles north in the valley, has unearthed a rare collection of implements of mound builders. The discovery was made in a ban of molding sand. There are several of these banks in the valley and also many ancient forts that will now be explored.

The find consists of a portion of a skeleton of a man who, was over eight feet tall. The jawbone is fully twice as large as an ordinary human being’s jawbone. Near the skeleton was also found a stone ax weighing 14 pounds, rare copper beads and fine specimens of copper wedges, and decorated pottery. Howe has in his possession 1,500 stone implements. 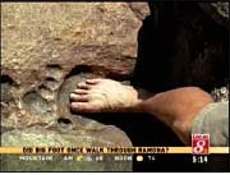 It’s one heck of a climb to see the Giant footprint; more than a thousand feet up a rugged mountain in the Cleveland National Forest. And James Snyder’s house sits right at the bottom. “I go out of my way to make a slip trail where nobody else has been and I was actually looking for gold,” said Snyder (the discoverer). That was back in February 2002 . But instead of finding gold on Gowers Mountain, Snyder found a giant fossilized footprint, at least it looks like one, embedded in solid granite. The footprint was found in what becomes a creek bed during the rainy season. It looks as though something big crossed the creek a long time ago leaving its footprint behind. What made it and when? Who knows….Granite is supposed to have formed over 1 billion years ago. No doubt scientists will try to argue that it just looks like a footprint as they do for every one of these types of anomalies. For science, if not fraud it’s the only acceptable answer. See Also:Evolution: The Stones Cry Out; Human Footprints in Rock Supposedly Million of Years Old. Giant footprint