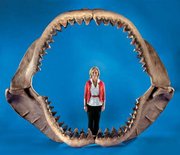 The largest Shark Jaws from the largest shark teeth

“A shark, . . . (larger than). . .  a semi truck swims through the ocean. Sensing prey ahead, the monster attacks, opening a mouth bigger than a subway car turned sideways, and lined with teeth. . .( larger than). . . the size of a man’s hand.

And next month, anyone with a spare half-million dollars or so can make a play for the most spectacular remains of these. . . creatures ever discovered.

goes up for sale on June 21, at Heritage Auctions in Dallas, Texas.

Courtesy of the Bertucci family

Minimum bid is $625,000, but the jaws are expected to fetch up to $700,000, according to David Herskowitz, director of Heritage’s natural history department.

The jaw has four shark’s teeth that are more than 7 inches long — an extreme rarity. “I think there are probably less than 10 known in existence,” Herskowitz said.”

Heritage Auctions Plenty of standing room: Carcharocles megalodon was the largest shark that ever lived on Earth. The jaw measures 9 feet tall and 11 feet across.