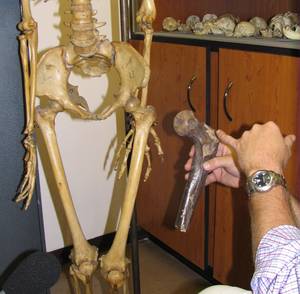 “Professor Francis Thackeray shows Michael Tellinger and friends the rarely seen part of the upper leg bone with hip joint of a giant that would have stood about 12 feet or 3,5 metres tall. This bone has been in the vaults of of the medical school at WITS University, Johannesburg since the early 1960s, when it was found by miners in a mine in northern Namibia. It is one of the most precious and rare specimens available today that clearly indicate the existence of giants in Southern Africa more than 40,000 years ago.
Michael shares this video clip as part of his continued research into the origins of humankind, the vanished civilizations of southern Africa and the strange anomalies we discover on this journey.” Heidelberg man

I do not want to discourage any find, as this femur is large. However this giant femur does not calculate to a 12 foot individual. The German femur is much much larger, you can see a replica of this, the Berg aukus femur and the German femur at the Greater Ancestors World Museum in Jacksonville Florida. It is a giant, but it is not a 12 foot giant, that’s my official statement.