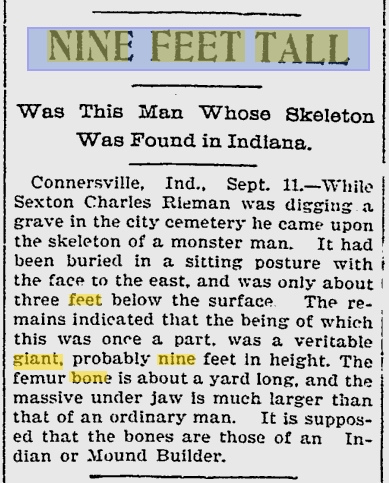 Was This Man Whose Skeleton Was Found in Indiana. 9 foot

Connersville, Ind., Sept. 11.-While Sexton Charles Rieman was digging a grave in the city cemetary he came upon the skeleton of a monster man. It had been buried in a sitting posture, with the face to the east, and was only about three feet below the surface. The remains indicated that the being of with which ths was once a part, was a veritable giant, probably nine feet in height. The femur bone is about a yard long, and the massive under jaw is much larger than that of an ordinary man. It is supposed to be the bones of an Indian or Mound Builder. 9 foot 9 foot

A single individual at 9 feet ultimately destroys the theory of evolution. Among evolutionary beliefs man is more like a chimpanzee, and is believed to be smaller 3.5-4 feet in height. that is why evolutionist were so excited about the “hobbit fossil”. A nine footer is far from a hobbit. In some cases Robert Wadlow is believed and often tauted as the tallest man ever, in spite of me demonstrating over 1000 individuals that have been recorded taller. Evolutionists force fit the evidence to fit their beliefs in the scientific model of Greater Ancestry all of the evidence each nine footer is what would be predicted. Robert Wadlow was 8 foot 11 1/4 when he died and this skeleton was larger at 9 feet. Sorry Wadlow, like all evolutionists they have come out on the short end of the measuring stick.