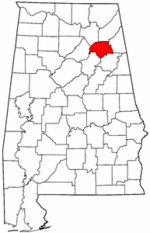 (Word for word from a County news listing)

D.A. Perkins Sr. died at Leesburg, in Etowah county on the 11th inst.
—

Mrs. Abel, wife of Mr. Wm. Abel, died at her home near Hoke’s Bluff on the 28th
of March of cancer of the breast. She was a good lady and leaves a kind husband
and children to mourn her departure.
—

The flood recently unearthed a great many relics of former civilization at
several points along the river banks, but especially on the Green Foster place above and Col. Sam Henry’s place in the Whorton bend.  Mr. James Henry who examined some of these curiosities on his father’s place, told us that some of the bones of the human skeletons found were of very unusual proportions,
indicating a larger stature than is now attained by the genus homo.

the owner, when alive, must have been at least twelve feet from the top of

his head to the bottom of his feet.

Two or three of these enormous skeletons were found.
—-