The finding of the skeleton of a giantess, seven feet two inches in stature, on a farm near Stubtown, Ohio, reopens the question as to the site of the Garden of Eden. John Watkins on whose farm the bones were unearthed, the mayor and some of the “prominent citizens” of Stubtown, are contending that the Watkins farm is the place, and that the relics are none other than those of Eve herself; a

nd they point to the opinions of certain more or less famous archaeologists to bear them out.

But there are other candidates for the honor, notably Mount Serendib, in Ceylon, where, the Mohammedans tell us, Adam fell. But then of course, the Mohammedans know nothing of Stubtown, and about the only evidence Mount Serendib has to support its claim is a curious impression in granite resembling a human foot, above five feet long and two in a half in width. They say it was made by Adam, who stood there on one foot for two hundred years to explate his crime. then so runs the legend – Gabriel took him to Mount Arafath, where he found Eve. But the Hindus deney this, averring that Buddha, when he ascended to heaven, stood on his rock, and that the footprint is evidence of the mighty spring he made. So the Stubtownites probably would have no troubles in enlisting the Hindus on their side.

Still, the Stubtown theory scarcely jumps with our preconceived notions of that early day geography. We had never thought of Eve as a Buckeye, though to be sure the state is famous for its apples, and the name itself – Stubtown – leaves something to be wished. Woonsocket, N. J., sounds quite as plausible, On the whole perhaps, Stubtown may as well relinquish its claim is the garden feature; but as to those bones being a part of Eve’s mortal coil, far be it from us to gainsay them from that. When Adam fell she probably came to the United States to get a divorce.

“Stubtown” is a nickname in the same way that “Stumptown” is a nickname for several cities in the United States. Stubtown is a derrogatory name, which is condescending to the people that live there. If you are going to condescend people you need to state the actual name which is: Ceylon, Ohio.

The entire article is indeed a mockery of Christians and Jews by a Christian Basher, Jew hating journalist. The article is written as satire, however it is written about a true event, the discovery of a footprint and a set of bones which the author does verify. “is a curious impression in granite resembling a human foot, above five feet long and two in a half in width. They say it was made by Adam,” The first part of this staement is matter of factly about an actual impression, and the last part is the scoffing of people saying that the true impression is “made by Adam”. . . . with which even this author would agree with.

The next phrase: “but as to those bones being a part of Eve’s mortal coil,” the same thing happens; “those bones” refers to a concrete object as being legitimate but scoffs the interpretation of the narrative that they belong specifically to the Biblical Eve. . . . with which even this author would agree with.

The evidence here for giants is sound: a giant footprint 5 feet long, and a seven foot two skeleton. 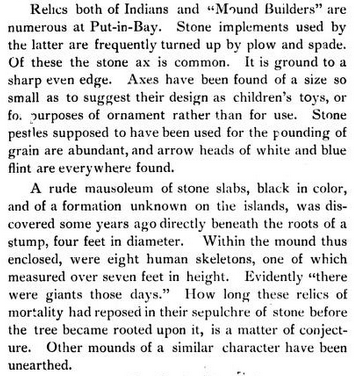