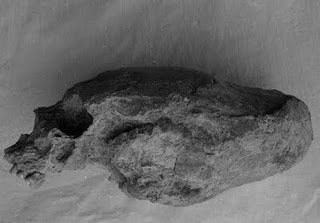 Elongated Skull from Iran. This skull also seems to have had some compression that happened to the skull. It seems that this skull is a bit larger than average in size (1260 cc) and may be a normal occuring phenomenon.

Examples of this technique, supposedly last performed on infants in the Congo of Africa and the Island of Vanuatu in the south Pacific Ocean area known as Melanesia, well into the 20th century, have also been found in Egypt, during the Amarna period, Sudan, Iraq, Syria, Russia, the island of Malta, as well as many places in Peru and Bolivia, and amongst the Olmecs of Mexico.

“What you are capable of doing via this technique is to change the shape of the skull, but not the actual volume; you can alter the shape, but not the size. However, Tello found several skulls,

at least 90 at the site called Cerro Colorado adjacent to the main graveyard in Paracas, which had cranial volume larger, and in some cases 2.5 times larger than a conventional modern human skull.

How is this possible? As I have said, deformation can alter shape, but not the volume of bone material, and certainly not twice as much.”

It is therefore obvious that we are dealing with 2 different phenomena; elongation through binding, and elongation via genetics.