– Dr. Duren J. H. Ward has returned to Iowa City, U.S.A., from Okoboji, where he has been excavating in the famous Okoboji mound, which was discovered and partially explored last summer. Dr. Ward made many finds which will
be of the greatest importance to the scientific world.
Six men were employed for a week in excavating the mound, removing 5400 cubic feet of
clay. The mound was fifty-four feet in diameter, six feet down and thirty feet across the top.
It was built by installments, as there were several strata-. The mound has contained more than
one ? hundred skeletons, Dr. Ward says, and he found the remains of twenty-eight men, most of them in an excellent state of preservation.
The skeletons were of different racial types. Those on the lowest level were the best preserved, being taken from a depth of six and a half feet. These were very large men and were powerful in ‘every way. Dr. Ward says that one bad the strongest lower jaw he ever saw in any collection.

HAD BEEN KILLED IN BATTLE. .

In describing it he said: — ‘It was not bestial, but strong in its human aspects. This man and several others had been killed in battle far away. Only their larger bones were buried here, and some of these had been partly eaten away by wolves or other carnivora. Probably all of the smaller bones had been devoured. In one ‘ case ten -if the smaller bones had been found and brought’ home for burial by placing them inside of : the skull.’
Dr. Ward found evidence of the handiwork of the white man in only the recent burials. With the bones were beads and iron tomahawks. Many photographs were taken during the excavation. Some of these show the remains intheir position after being uncovered and brushed before disturbing. Every discovery was sketched, measured, marked and. accurately -located. Dr. Ward, will prepare maps and elevations for future lecture work.

Utmost care was taken in exhuming the skeletons. The earth was removed in thin layers and every shovelful of dirt was looked over. Trowels and smaller instruments were used as soon as any object was discovered. The most
fraigile bones were coated with a preservative varnish -as soon as possible. The work roused great interest in those driving near Okoboji. Visitors came by the hundred every day and their questions were Infinite.
Dr. Ward hopes that the State Historical Society, the Anthropological Association, and the University of Iowa will provide for the exhibit for these relics of remote people. ‘The general public has an Interest in them/’ says Dr. Ward. ‘They t’-ach many lessons, and these shall be co-ordinated as soon as possible.
It will take co-operation to do it. There is need of the work of anatomists, chemists, historians, archaeologists and anthropologists. The data are complicated, but the lessons will be simple and enchanting. The remains, which have been taken from the mound, when mounted, arranged and accompanied by photos and charts, will prove most instructive to the people of Iowa.’
Evening News (Sydney, NSW : 1869 – 1931) Sat 4 Feb 1905,  Page 3 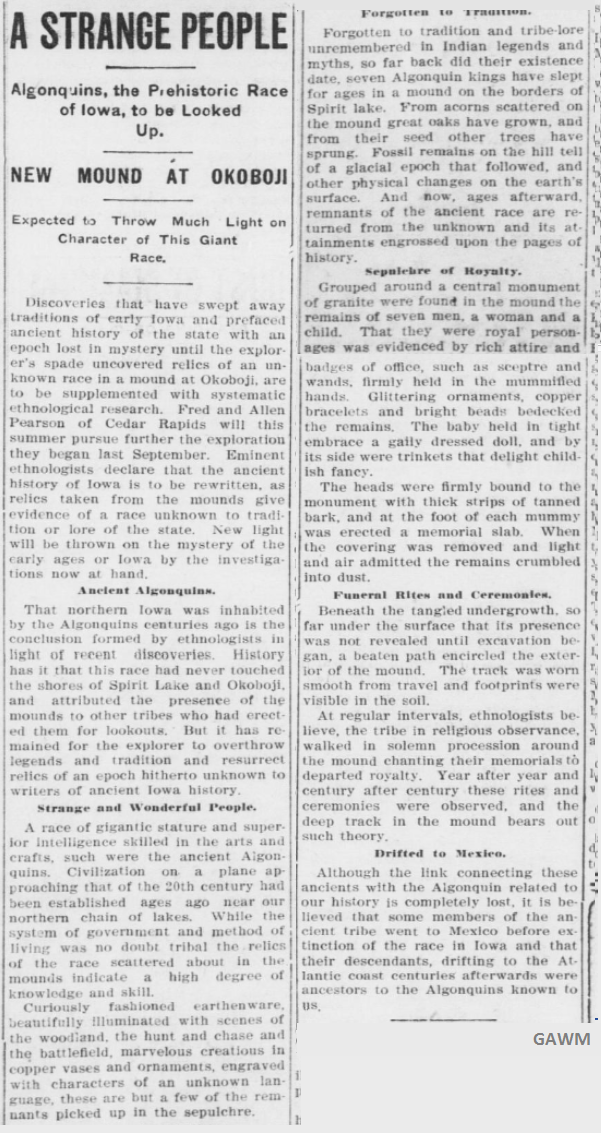 A STRANGE PEOPLE
Algonquins, the Prehistoric Race of Iowa, to be Looked Up.
NEW MOUND AT OKOBOJI
Expected to Throw Much Light on Character of This Giant Race.
Discoveries that have swept away traditions of early Iowa and prefaced ancient history of the state with an epoch lost in mystery until the explorer’s spade uncovered relics of an unknown race in a mound at Okoboji, are to be supplemented with systematic ethnological research. Fred and Allen Pearson of Cedar Rapids will this summer pursue further the exploration they began last September. Eminent ethnologists declare that the ancient history of Iowa is to be rewritten, as relics taken from the mounds give evidence of a race unknown to tradition or lore of the state. New light will be thrown on the mystery of the early ages or Iowa by the investigations now at hand.
AiM’irnt AlKonquinM.
That northern Iowa was inhabited by the Algonquins centuries ago is the
conclusion formed by ethnologists in light of recent discoveries. History has it that this race had never touched the shores of Spirit Lake and Okoboji. and attributed the presence of the mounds to other tribes who had erected them for lookouts. ‘ Hut it has remained for the explorer to overthrow legends and tradition and resurrect relics of an epoch hitherto unknown to writers of ancient Iowa history.
Strang nntl Wonderful IVoplf.
A race of gigantic stature and superior intelligence skilled in the aits and crafts, such were the ancient Algonquins. Civilization on a plane approaching that of the 20th century had been established ages ago near our northern chain of lakes. While the system of government and method of living was no doubt tribal the relics of the race scattered about in the mounds indicate a high degree of knowledge and skill.
Curiously fashioned earthenware, beautifully illuminated with scenes of the woodland, the hunt and chase ami the battlefield, marvelous creatious in
copper vases and ornaments, engraved with characters of an unknown language, these are but a few of the remnants picked up in the sepulchre.
FurKiilIrn to Tradition.
Forgotten to tradition anil tribe lore unremembered in Indian legends and myths, so far back did their existence date, seven Algonquin kings have slept
for ages in a mound on the borders of Spirit lake. From acorns scattered on
the mound great oaks have grown, and from their seed other trees have
sprung. Fossil remains on the hill tell of a glacial epoch that followed, and
other physical changes on the earth’s surface. And now, ages afterward,
remnants of the ancient race are re turned from the unknown and its at
tainmentts engrossed upon the pages of history.
trpnlrbrt of Royalty.
Grouped around a central monument of granite were foun! in the mound the
remains of seven men. a woman and a child. That they were royal person
ages was evidenced by rich attire and G?e Urdu Ghat is Urcbztod ” BREWING badges of office, such as sceptre and wands, firmly held in the mummified
hands. Glittering ornaments, copper bracelets and bright beads bedecked
the remains. The baby held in tight embrace a gaily dressed doll, and by its side were trinkets that delight child ish fancy.
The heads were firmly bound to the monument with thick strips of tanned bark, and at the foot of each mummy was erected a memorial slab. When
the covering was removed and light and air admitted the remains crumbled
into dust.
Funeral lit ten anil C’rrrmonlcx. Beneath the tangled undergrowth, so far under the surface that its presence was not revealed until excavation began, a beaten path encircled the exterior of the mound. The track was worn smooth from travel and footprints werevisible in the soil.
At regular intervals, ethnologists believe, the tribe in religious observance,
walked in solemn procession around the mound chanting their memorials to
departed royalty. Year after year and century after century these rites and
ceremonies were observed, and the deep track in the mound bears out such theory.
Drifted to Mnlcii, Although the link connecting these ancients with the Algonquin related to our history js completely lost, it is believed that some members of the ancient tribe went to Mexico before extinction of the race in Iowa and that their descendants, drifting to the Atlantic coast centuries afterwards were ancestors to the Algonquins known to us.