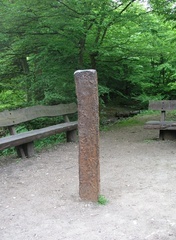 Der Eiserne Mann (The Iron Man) is an old iron pillar partially buried in the ground. It is located in the German national forest of Naturpark Kottenforst-Ville. The shape of the iron pillar is roughly square and it extends 1.47 m (4.8 feet) above ground and approximately 2.7 m (8.8 feet) below ground. The pillar is unique to Central Europe, and is alleged to be an out-of-place artifact. Eiserner Mann is located in an area that was a converging point for ancient forest pathways.

The pillar was first mentioned in a 17th century document, where it was used as a village boundary marker.

People have claimed that Eiserner Mann was made with an unknown metal. Over the years, the pillar has showed no signs of rust.

This is odd because modern day iron products always rust. To add fuel to the fire, strange sounds and lights have been reported by travelers who visit the forest at night. Eiserner Mann is a popular destination for hikers and often acts as a meeting place for gatherings.

After the long exposure to the weather, the iron man shows signs of weathering but there is remarkably little trace of rust. It is located at 50.70757° N by 6.96105° E at an elevation of approximately 159 m.