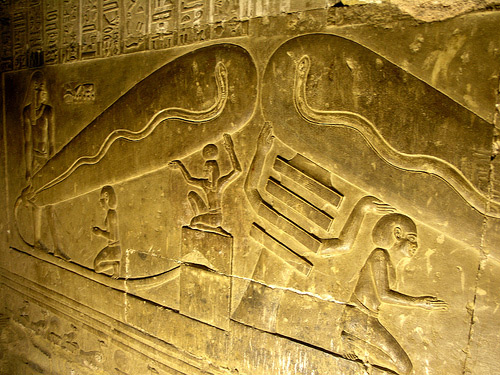 THE DENDERA LIGHTS:
dendera light dendara light dendera light dendara light
There are three stone reliefs (carvings) that can be viewed in the Hathor Temple section of the Dendera Archaeological complex which is located on the banks of the Nile approximately 300 miles south of Cairo, Egypt. Some researchers’ claim that these images depict an ancient form of electrical technology or lighting system (Dendera lights).  Mainstream Egyptologists strongly dispute that there is anything unusual about the carvings and claim that they merely represent aspects of Egyptian mythology and actual show the birthing of a snake from a lotus flower.  However, a close look at the picture does raise some interesting points and questions. Dendura Lights.

The lotus flower is easily recognisable but the beam (or bulb) is unusual.  The stem of the lotus is unusually long and cable-like – and does appear to connect to a device that is similar to the ancient Baghdad Battery. (Also featured in this section.) The pillar does look remarkably like a modern electrical insulator of the type that is used on national power-lines and from this device two arms reach up to support the bulb or beam.  The snake is a representation of power and energy and leaves the lotus in a manner very similar to the elongated filaments associated with industrial lighting. There have been many claims used to try and prove that these objects were real and these claims have subsequently been debunked.  This criticism has then been associated with the carvings too.  Those opposed to the electrical lighting theory have often argued that if these existed there would have been archaeological artefacts found to corroborate pictures.  They claim that no such artefacts have been found. This is a fallacious argument.  It depends on the idea that something can’t exist because humanity either hasn’t found it or can’t understand it.  This is a subject worth exploring in much more detail.