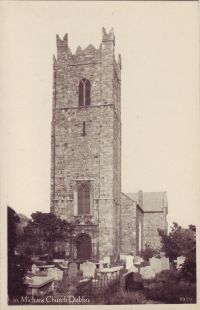 “In Inisfail the fair there lies a land, the land of holy Michan. There rises a watchtower beheld of men afar.”

In addition to the rebuilding in 1685, the church underwent extensive repair in 1828. During the shelling of the Four Courts in 1922, the roof suffered damage and the east window was shattered and repaired with plain glass. In 1958 the present window was added, moved from St. Matthias’ Church on Adelaide Road. It is the oldest church north of the Liffey, and possibly the only one surviving from a Viking foundation. Crusader Mummy.

The St. Michan’s organ is one of the oldest in the country still in use. It is believed that George F. Handel played it when composing The Messiah. A panel on the organ gallery, carved from a single block of wood, portrays a series of musical instruments in high relief. A Penitent’s Stool, an eighteenth-century pulpit and font, and a chalice dating from 1516 are among the items of note. Crusader Mummy. 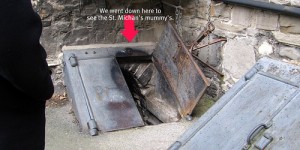 The main attraction, however, lies in the vaults underneath the church proper, its access reached by a narrow stone stairway. On either side of a tunnel lined with limestone and mortar extend long narrow galleries for the placing of coffins. Some are private and fastened with wooden or iron doors, while others are open. Crusader Mummy.

Through the iron bars in some, the coffins can be seen lying in a helter skelter fashion, some apparently bursting at the seams with an arm or leg sticking up. 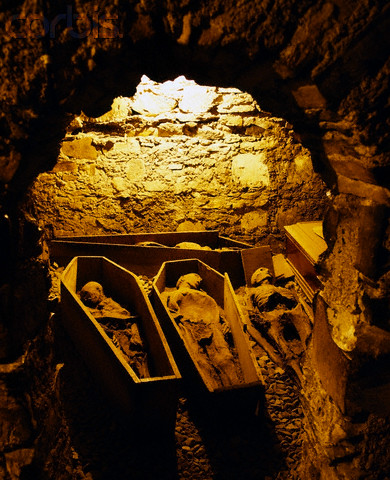 “There sleep the mighty dead as in life they slept,”

In one of these open chambers lie the grisly contents sought by numerous visitors: the Big Four. Here the casket lids are off, exposing bodies partly covered with taut, leathery skin, covered in a thick layer of dust. Three of the coffins lie in a row across the front, a woman on the right, a man with a hand and both feet cut off in the center–some say because he was a thief, others say so the body could fit into the coffin. On the left is a nun. 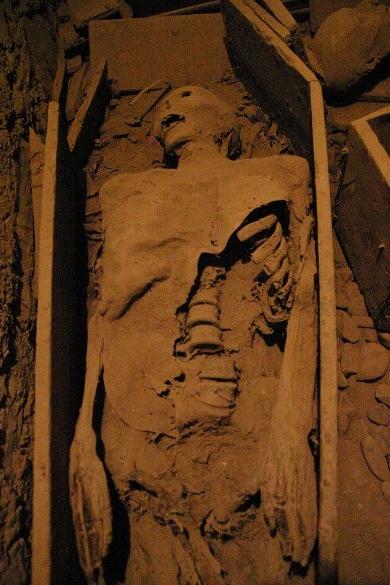 The coffin along the rear wall is that of the Crusader, the mummy believed to have been a soldier returned from the Crusades.

His body has been cut in half, in order for it to fit the coffin.

One of his hands is lifted slightly in the air.

The last room holds the coffins of the Sheare brothers who were executed by the British following the Rising of 1798. When their old coffins were replaced with new ones at the bicentennial commemoration in 1998, it was discovered that the standard British punishment for traitors had been enacted: the bodies had been hanged, drawn and quartered.

A very tall 800 year old mummy, a six-and-a-half foot man popularly believed to have been a crusader whose body was cut in half in order to get him to fit into his coffin.

There are a few things about this image that makes me think that this individual was much taller than 6 and a half foot.

6 feet 6 inches is average for that time period, there were many large people this size. There is no conspiracy it was necessary to shorten the body to get it to fit into the coffin., but here we have yet another mummy that may have been 7 foot tall.