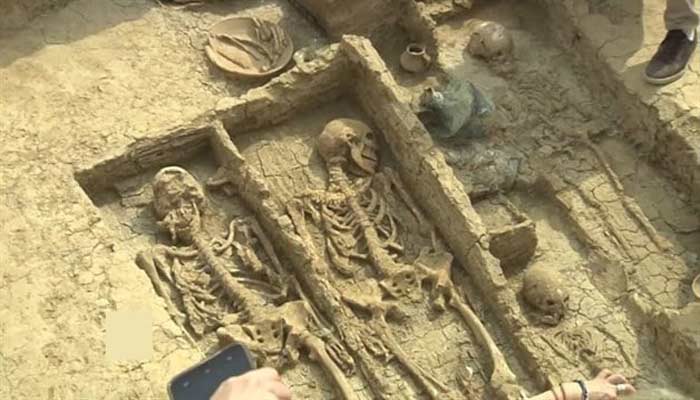 During archaeological excavations in Crimea , experts discovered a necropolis of the Byzantine Empire where the tomb of a giant was .

While the reconstruction work on the Mithridates Staircase in Kerch continues, archaeological excavation work has also started in the area.

This revealed up to 100 square meters of a necropolis, which had burials of people who once visited the temple of Juan Bautista .

To date there are 27 uncovered burials , some of children and twin burials. In addition to other elements, such as bronze pendants or bracelets.

They even managed to find felt clothing in one of the burials . This was very helpful as it allowed them to date the find .

Tomb of a giant in the necropolis

The find itself was not common and it became much more strange when they found a funerary box that exceeded 2.30 meters in length . When they uncovered it, they found what appeared to be the skeleton of a giant.

If the standard physique of the inhabitants of the area in the past is taken into account, finding a skeleton of a man that exceeded two meters in height is something that does not agree with the data.

There is no other way to explain how the remains of this giant were buried in the area.

The remains were examined by the team’s anthropologist, who hopes to give an estimate of the age of the person buried there.

The excavation work has been slow due to the complicated terrain, which is mixed . In ancient times, garbage was simply thrown on the ground.

Then, in the Middle Ages , the necropolis was created on top of all the ancient remains. For this reason it has become difficult for archaeologists to give an exact interpretation of the origin of everything found.

At the moment, the experts are in negotiations with the diocese of Kerch-Feodosia to be able to extract the remains found and examine them better.

Experts continue to investigate the origin of the mysterious skeleton and the reason for its abnormal size. In addition to finding an explanation for its origins.

The existence of giants is common in different ancient cultures, despite the fact that traditional archeology tries to keep these types of findings hidden.

But discoveries like the one in Crimea show us that they existed.