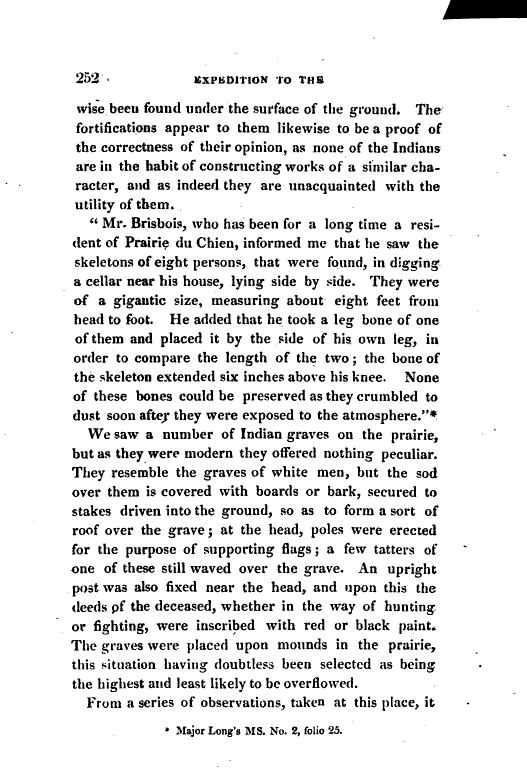 THEY WERE OF A GIGANTIC SIZE

“Mr Brisbois, who has been for a long time a resident of Prarie du Chien, informed me that he saw the skeletons of eight persons, that were found, in digging a cellar near his house, lying side by side. They were of a gigantic size, measuring about eight feet from head to foot. He added that he took a leg bone of one of them and placed it by the side of his own leg, in order to compare the length of the two; the bone of the skeleton extended six inches above the knee. None of the bones could be preserved as they crumbled to dust soon after they were exposed to the atmosphere.

We saw a number of Indian graves on the prarie,  but as they were modern they offered nothing peculiar. They resemble the graves of white men, but the sod over them is covered with boards or bark, secured to stakes driven into the ground, so as to form a sort of roof over the grave; at the head, poles were erected for the purpose of supporting flags;  a few tatters of one of these still waved over the grave. An upright post was also fixed near the head, and upon this the deeds of the deceased, whether in the way of hunting or fighting, were inscribed with red or black paint. The graves were placed upon mounds in the prarie, this situation having doubtless been selected as being the highest and least likely to be overflowed.  –