The lack of mounds and other evidences of the presence of a semi-barbarous race in Crawford County, before the Indian first lighted his camp fires on the prarie, or in the forest of the Western Continent, has led archeologists and antiquarians to the conclusion that the county was a portion of the neutral ground which separated the hosts of two or more hostile nations of the Mound-Builders. 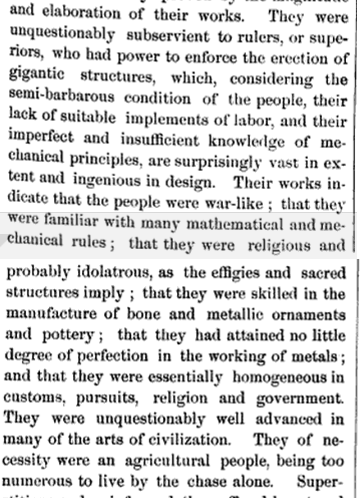 They were unquestionably subservient to rulers, or superiors, who had power to enforce the erection of gigantic structures, which, considering the semi-barbarous condition of the people, their lack of suitable implements of labor, and their imperfect and insufficient knowledge  of mechanical principles, are surprisingly vast in extent and ingenious in design their works indicate that the people  were war-like; that they were familiar with many mathematical and mechanical rules, that they were religious and probably idolatrous, as the effigies and sacred structures imply; that they were skilled in the manufacture of bone and metallic ornaments of pottery; that they had attained no little degree of perfection in the working of metals; and that they were essentially homogeneous in customs, pursuits, religion and government. They were unquestionably well advanced in many of the arts of civilization.

They of necessity were an agricultural people, being too numerous to live by the chase alone. 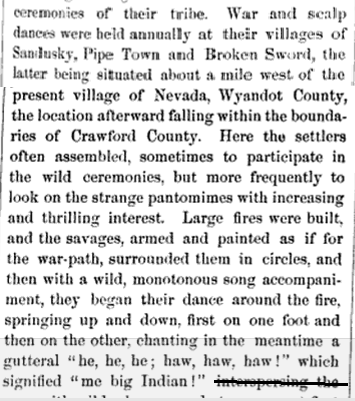 War and scalp dances were held annually at their villages of Sandusky, Pipe Town and Broken Sword, the latter being situated about a mile west of the present village of Nevada, Wyandot County, the location afterward falling within the boundaries of Crawford County. Here the settlers often assembled, sometimes to participate in the wild ceremonies, but more frequently to look onto the strange pantomines with increasing and thrilling interest. Large fires were built, and the savages, armed and painted as if for the war path, surrounded them in circles, and then with a wild, monotonous song accompaniment, they began their dance around the fire, springing up and down, first on one foot and then on the other, chanting in the meantime a gutteral “he, he, he; haw, haw, haw!'” which signified “me big Indian!”

This phrase: ” the presence of a semi-barbarous race in Crawford County,” barbarous means barbaric or large barbarian.

The Romans and Greeks definitely claim their barabarian enemies as being unusually tall. The word Barbarian is understood as a tall brute.

This phrase: “Some authorities have suggested that the Mound Builders ultimately deteriorated. Some might say that this phrase may be talking about their primitive culture, and that is why statements like the ones above rids any doubt that the Mound-builders were a sophisticated culture.

The Indians words at their ceremonies: “me big Indian” is an observation of greater size and strength indeed they were bigger better faster stronger and smarter than today’s deteriorated modern man. . .”Me big Indian” they said!