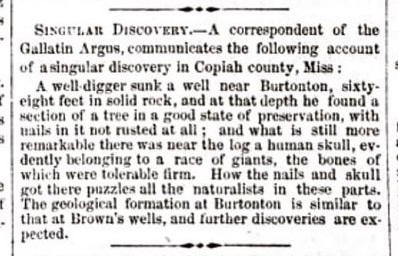 Singular Discovery. -A correspondent of the Gallatin Argus, communicates the following account of a singular discovery in Copiah Count, Mississippi.
A well digger sunk a well near Burtonton, sixty eight feet in solid rock and at that depth he found a section of a tree in a good state of preservation,  with nails in it not rusted at all; and what is still more remarkable there was near the log a human skull, evidently belonging to a race of giants, the bones of which were tolerable firm. How the nails and skull got there puzzles all the naturalists in these parts. The geological formation at Burtonton is similar to that at Browns wells, and further discoveries are expected.