Coins found with the Cardiff Giant 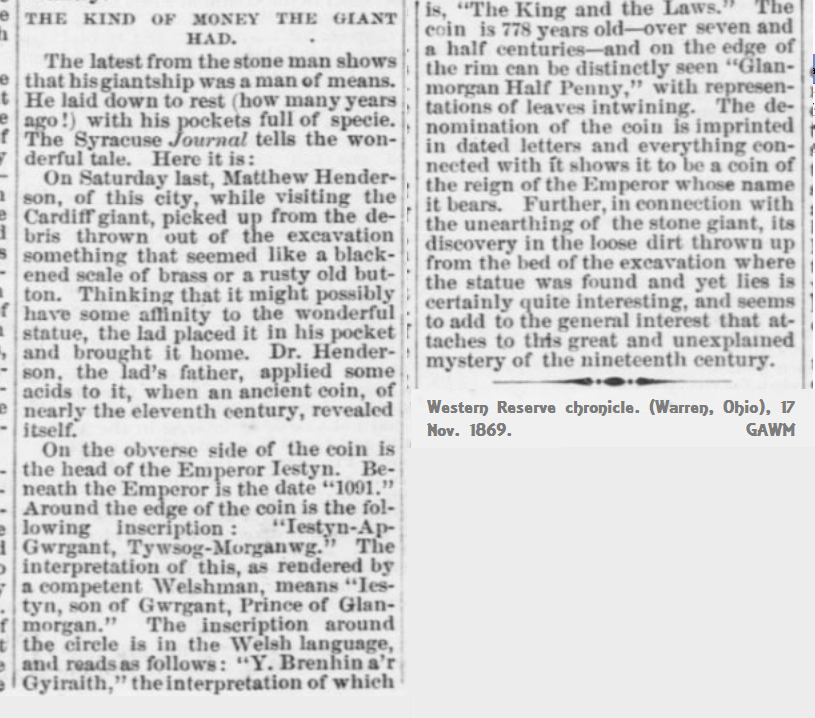 KIND OF MONEY THE GIANT HAD.

(This article is from a document reader and has not been edited)
The latest from the stone man shows
thathisgiantshipwasamanof means.
He laid down to rest (how many years
ago!) with his pockets ful

l of specie.
The Syracuse Journal tells the won
derful tale. Here it is :
On Saturday last, Matthew Hender
son, of this city, while visiting the
Cardiff giant, picked up from the de
bris thrown out of the excavation
something that seemed like a black
ened scale of brass or a rusty old but
ton. Thinking that it might possibly
have some affinity to the wonderful
statue, the lad placed it in his pocket
and brought it home. lt. -lende

r-
son. the lad’s father, applied some
acids to it, when an ancient coin, of,
nearly the eleventh century, revealed i
:.! ” i
On the obverse side of the coin is
the head of the Emperor lestyn. Be- j
neath the Emperor is the date “1091.” j
Around the edge of the coin is the fol-!
lowing inscription : “Iestyn-Ap-;
Gwrgant, Tywsog-Morganwg.” The !
interpretation of this, as rendered by
a competent “Welshman, means “les-,
tyn, son of Gwrgant, Prince

of Glan-1
morgan.” The inscription around
the circle is in the Welsh language, :
ami reads as follows: “Y. Brenhin a’r
Gyiraith,” the interpretation of which
is, “The King and the Laws.” The
coin is 77.S years old over seven and
a half centuries and on the edge of
the rim can lie distinctly seen “Glan
inorgan Half Penny,” with repre

sen
tations of leaves intwining. The de
nomination of the coin is imprinted
in dated letters and everything con
nected with ft shows it to be a coin of
the reign of the Emperor whose name
it bears. Further, in connection with
the unearthing of the stone giant, its
discovery in the loose dirt thrown up
from the bed of the excavation where

the statue was found and yet lies is
certainly quite interesting, and seems
to add to the general interest that at
taches to Oris great and unexplained
mystery of the nineteenth century.
Sights and Scenes on the Western