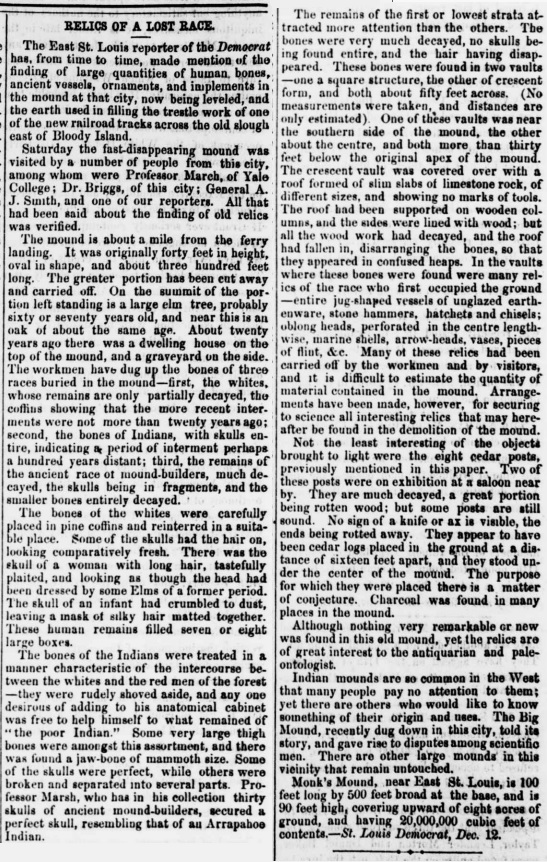 RELICS OF A LOST RACE.

The East St. Louis reporter of the Democrat
hus, from time to time, made mention of the
fiuding of large quantities of human, bones,
ancient vessels, ornaments, and implements in
the mound at that city, now being leveled, and
the earth used in filling the trestle work of one
of the new railroad tracks across the old siough
east of Bloody Island.
Suturday the fast-disappearing mound was
visited by a number of people from this city,
among whom were Professor March, of Yale
College ; Dr. Briggs, of this city ; General A.
J. Smith, and one of our reporters. All that
had been said about the finding of old relics
W’a8 verified.
The mound is about a mile from the ferry
landing. It was originally forty feet in height,
oval in shape, and about three hundred feet
long. The greater portion has been cot away
and carried off. On the summit of the por
tion left standing is a large elm tree, probably
sixty or seventy years old, and near this is an
oak of about the same age. About twenty
years ago there was a dwelling house on the
top of the mound, and a graveyard on the side.
The workmen have dug up the bones of three
races buried in the mouna—first, the whites,
whose remains are only partially decayed, the
enflius showing that the more recent inter
ments were not more than twenty years ago;
second, the bones of ludians, with skulls en
tire, indicating i* period of interment perhaps
a hundred years distant; third, the remaius of
the ancient race ot mound-builders, much de
cayed, the skulls being in fragments, and the
smaller bones entirely decayed. ‘
The bones of tho whites were carefully
placed in pine coffins and rcinterred in a suita
ble place. Some of the skulls had the hair on,
looking comparatively fresh. There was the
skull of a woman with long hair, tastefully
plaited, and looking as though the head had
been dressed by some Elms of a former period.
‘1 he skull of an infant had crumbled to dust,
leaving a mask of silky hair matted together.
These human remaius filled seven or eight
large boxes.
The bones of the Indians were treated in a
manner characteristic of the intercourse be
tween the whites and the red men of the forest
—they were rudely shoved aside, and any one
desirous of adding to his anatomical cabinet
was free to help himself to what remained of
” the p<*or Indian.” Some very large thigh
bones were amongst this assortment, and there
was found a jaw-bone of mammoth size. Some
of the skulls were perfect, while others were
brok«*n and separated into several parts. Pro
fessor Marsh, who has in his collection thirty
skulls of ancient mound-builders, secured a
perfect skull, rcsembliug that of au Arrapahoe
Indian.
The remains of the first or lowest strata at
tracted more attention than the others. The
bones were very much decayed, no skulls be
ing found entire, and the hair having disap
peared. These bones were found in two vaults
—one a square structure, tbe other of crescent
form, and both about fifty feet across. (No
measurements were taken, and distances are
only estimated). One of these vaults was near
the southern side of tbe mound, the other
about the centre, and both more than thirty
feet below the original apex of the mound.
The crescent vault was covered over with a
roof formed of slim slabs ot limestone rock, of
different sizes, and showing no marks of tools.
Tbe roof had been supported on wooden col
umns, and the sides were liued with wood; but
all the wood work had decayed, and the roof
had (alien in, disarranging the bones, so that
they appeared in confused heaps. In the vaults
where these bones were found were many rel
ics of the race who first occupied the ground
—entire jug-shaped vessels of uoglazed earth
enware, stone hammers, hatchets and chisels;
oblong heads, perforated in tbe centre length
wise, marine shells, arrow-heads, vases, pieces
of flint, Ac. Many oi these relics had been
carried off by the workmen and by visitors,
and it is difficult to estimate the quantity of
material contained iu the mound. Arrange
ments have been made, however, for securing
to science all interesting relics that may here
after be found in the demolition of the mound.
Not the least interesting of tbe object«
brought to light wero the eight cedar posts,
previously mentioned in this paper. Two of
these posts were on exhibition at a saloon near
by. They are much decayed, a great portion
being rotten wood; but some posts are still
sound. No sign of a knife or ax is visible, tbe
ends being rotted away. They appear to have
been cedar logs placed iu the ground at a dis
tance of sixteen feet apart, and they stood un
der the center of the mound. The purpose
for which they were placed there is a matter
of conjecture. Charcoal was found in many
places in the mound.
Although nothing very remarkable or new
was found in this eld mound, yet the relics are
of great interest to the antiquarian and pale
ontologist.
Indian mounds are to common in the West
that many people pay no attention to them;
yet there are others who would like to know
something of their origin and uses. The Big
Mound, recently dug down in this city, told ito
story, and gavo rise to disputes among scientific)
men. There aro other large mounds iu this
vieinity that remain untouched.
Monk’s Mound, near East St. Louis, is 100
feet long by 50U feet broad at the base, and is
90 feet high, covering upward of eight aores of
ground, and having 20,000,000 cubic feet of
contents.— St. Louis Democrat , Dec. 12.