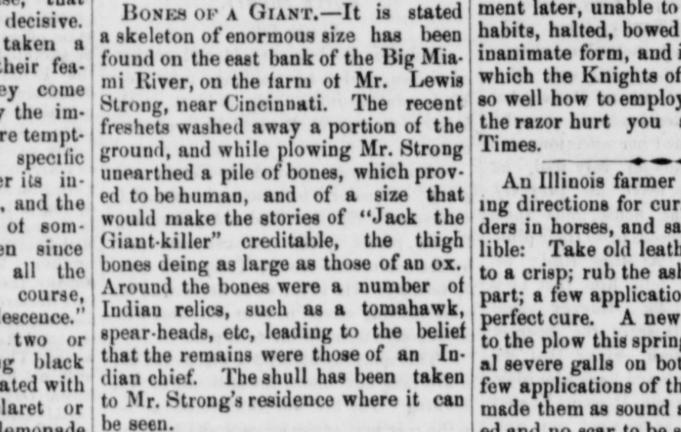 Bones of a Giant.- It is stated of enormous size has been found on the East bank of the Big Miami River, on the farm of Mr. Lewis Strong, near Cincinnati. The recent freshets washed away a portion of the ground, while plowing Mr, Strong unearthed a pile of bones, which proved to be human, and of a size that would make the stories of “Jack and the Giant-Killer” creditable, the thigh bones being as large as those of an ox. Around the bones were a number of Indian relics, such as a tomahawk, spear-heads etc, leading to the belief that the remains were those of an Indian chief. The skull has been taken to Mr. Strong’s residence where it can be seen. Enormous Skeleton

“Enormous bones, . . . being as large as those of an ox”, its too bad there are no details. Preferably there would be actual measurements. Hopefully there would be more details come out in the future. These articles are placed here so that “giant-hunters” could do follow ups. GAWM needs field-agents to research these giants in and around their area, if you happen to live in this area and would to do more research and then post your comments in the comments section we will post your follow ups.