Chinese made early use of diamond 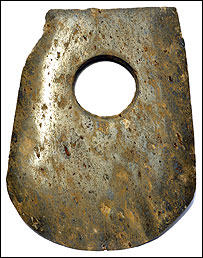 Stone age craftsmen in China were polishing objects using diamond 2,000 years before anyone else had the same idea, new evidence suggests.

Quartz was previously thought to be the abrasive used to polish ceremonial axes in late stone age, or neolithic, China.

But the investigations of a Chinese-US team of scientists indicate that quartz alone would not have been able to achieve such lustrous finishes.

The team reports its diamond findings in the journal Archaeometry.

Harvard University physicist Peter Lu and colleagues studied four ceremonial burial axes, the oldest of which dates to about 4,500 years ago.

The team used X-ray diffraction and electron microprobe analysis. This determined that the most abundant mineral in the axes was corundum, known as ruby in its red form and sapphire in all other colours.

The majority of prehistoric stone objects are traditionally thought to have been fashioned from rocks containing minerals no harder than quartz. But corundum is one of the hardest minerals known to science, second only to diamond. 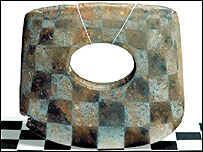 What the researchers found even more intriguing were the finely polished surfaces of the axes, which reflect an image like a mirror.

To test their ideas, the researchers took a small stone sample from one of the axes, an artefact from the Liangzhou culture, and subjected it to polishing with diamond, alumina and silica, following modern techniques.

Using an atomic force microscope to examine the polished surfaces on a nanometre scale, the scientists found the diamond-polished surface most closely matched the surface from the ancient axe.

Quartz could not have been the abrasive used by the ancient craftsmen.

“Our understanding of the first use of diamond is based on textual evidence from 500 BC in India. But even that – though probably right – is speculative. This is physical evidence a couple of thousand years earlier,” Dr Lu told the BBC News website.

“Any experiment does not give you 100% certainty, but this is the only possibility that makes sense.”

However, even with the best modern polishing technologies available, the research team could not achieve a surface as flat and smooth as that on the ancient axe. The ancient craftsmen must have used highly sophisticated techniques.

The authors speculate that the use of diamond and corundum abrasives could be linked to an explosion in finely polished jade artefacts during the Chinese neolithic.

The use of corundum could have slashed production times while diamond could have added the finishing touches, they suggest.

Quartz, previously thought to have been the neolithic lapidary’s abrasive of choice, is only slightly harder than jade.