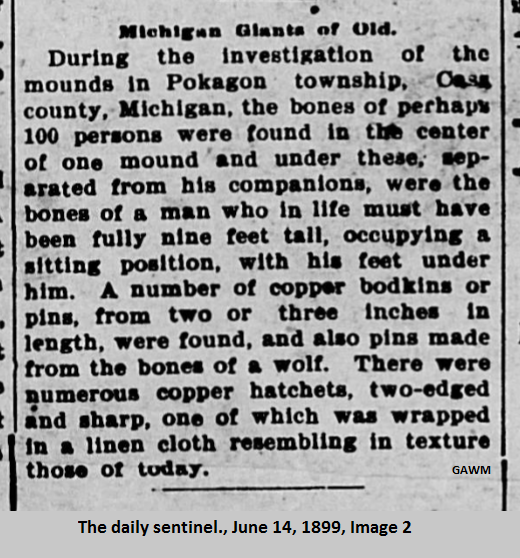 During the investigation of the mounds In Pokagon township, Cass
county, Michigan, the bones of perhaps 100 persons were found in the centerof one mound and under these, separated from his companions, were the
bones of a man who in life must have been fully nine feet tall, occupying a
sitting position, with his feet under him. A number of copper bodkins or pins, from two or three Inches In length, were found, and also pins made from the bones of a wolf. There were numerous copper hatchets, two-edged and sharp, one of which was wrapped in a linen cloth resembling in texture those of today.

This article comes from “My Daily Giant” Pinterest page. I was able to track down the source article and post it up here. At 9 feet tall: this giant is outside the range of all modern people. There is no indication of a genetic defect in this individual which makes this individual a healthy example. The largest example of a healthy modern giant is in the 7 foot range. This skeleton exceeds all modern examples by almost 2 feet.