Special Dispatches to the Chronicle. 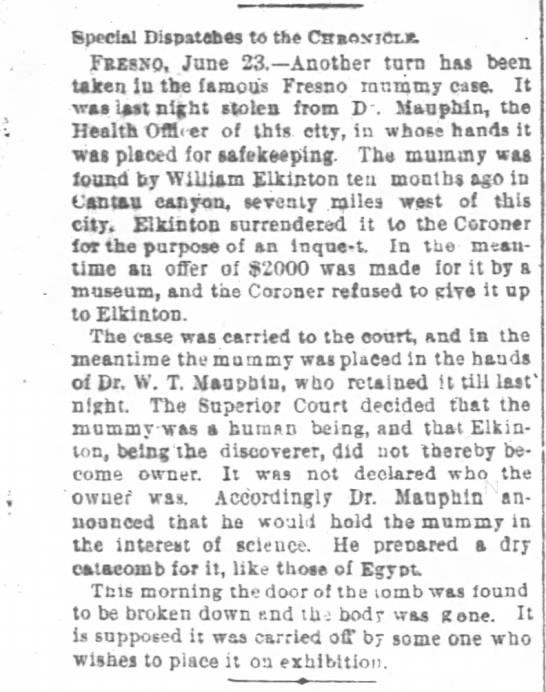 FRESNO, June 23.- Another turn has been taken in the famous Fresno Mummy case. It was last night stolen from Dr. Mauphin, the Health Officer of this city in whose hands it was placed for safekeeping. The mummy was found William Elkinton ten months ago (August) in Cantau canyon, seventy miles west of this city.

Elkinton surrendered it to the coroner for the purpose of an inquest.

In the meantime an offer of $2000 was made for it by a museum, and the Coroner refused to give it up to Elkinton.

The case was carried to the court, and in the meantime the mummy was placed in the hands of Dr. W. T. Mauphin, who retained it til last night. The superior Court decided that the mummy was a human being, and the Elkinton, being the discoverer, did not thereby become owner. It was not declared who the owner was. Accordingly Dr. Mauphin announced that he would hold the mummy in the interest of science. He prepared a dry catacomb for it, like those of Egypt.

This morning the door of the tomb was found to be broken down and the body was gone. It is supposed it was carried off by some one who wishes to place it on exhibition. (Researched by Eric Richards)

The Fresno Mummy Said to Be in Oakland.

Undertaker Taylor Tells How it was stolen.

A Bitter Contest Waged in the Courts for the Relic.

They do say that the Fresno mummy is in Oakland and if so the man who ought to know all about it is W. W. Taylor, the twelfth street undertaker. Mr. Taylor says that it is not, but then Mr. Taylor had his premises at Fresno searched once before to find the mummy and the deputy sheriff who made the hunt failed to find the body, although it was safely reposing at the time on the shelves of Mr. Taylor’s undertaking shop in Fresno in a zinc lined casket.

The reason there is so much trouble over the mummy and the reason why its present hiding place is kept dark is because there are several claiments for the body, which is worth $2000.

The mummy was discovered in 1891 in the mountains near Fresno by two prospectors. It was brought to Selma, where an inquest was held upon it. Nobody realizes its value and as no one claimed it Taylor was telephoned to at Fresno and had the body brought to that town for burial.

Upon its arrival the body was seen by a newspaperman. He at once saw that it was a sure enough mummy and the story he wrote about it caused it to become a great attraction. For five days Taylor’s undertaking parlors were crowded with a curious throng to see the mummy.

Then someone stepped in and offered $2000 for it. Directly a monetary value attached to it, the claimants for possession became as numerous as the leaves that fall in autumn. The prospector that discovered it wanted it. A doctor named Maupan in Fresno claimed it, and several others sought for it.

Under the laws of California, though, a human body is not property, and the mummy was unquestionable human. After a body is unidentified for fourty eight hours, and no relative claims it, then a registered physician, upon filing the proper papers, can secure it for scientific purposes only.

The last seen of the mummy was when it was in Taylor’s possession. The man who discovered it sued Taylor to recover it and for $3000 in damages. The suit was thrown out of court.

Taylor’s place was searched, but the mummy was not found. He had it securely hidden on a shelf in a metallic casket. .

After a while the mummy was buried, so Taylor claimed today. After it had been underground about four months. Dr. Maupan, who had filed a claim for scientific purposes and to whom it legally belonged, had it exhumed. It was taken to his barn and from that place it was stolen by some one and has not since been seen.

They now say that it is in Oakland. It is here that Taylor ought to know something about it. What it is here for no one knows. Under the laws it cannot be exhibited. And if it cannot be used as a dime museum curiousity it has little value. (Research by Eric Richards)

The Fresno mummy, after having been exhibited for awhile, has been decently buried. (Research by Eric Richards) 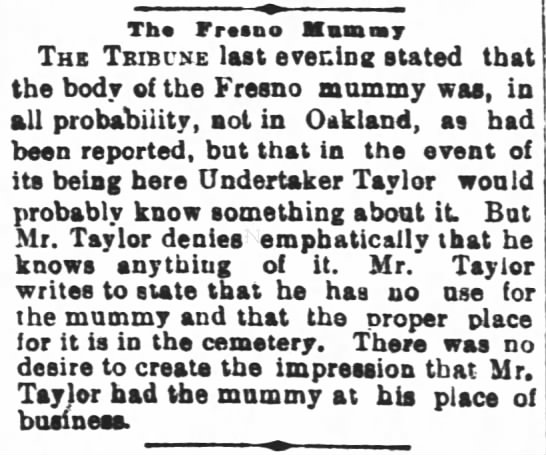 The Tribune last evening stated that the body of the Fresno mummy was, in all probability, not in Oakland, as had been reported, but that in its event of it being here Undertaker Taylor would probably know something about it. But Mr. Taylor denies emphatically that he knows anything of it. Mr. Taylor writes to state that he has no use for the mummy and that the proper place for it is in the cemetery.  There was no desire to create the impression that Mr. Taylor had the mummy at hos place of business. (Researched by Eric Richards) 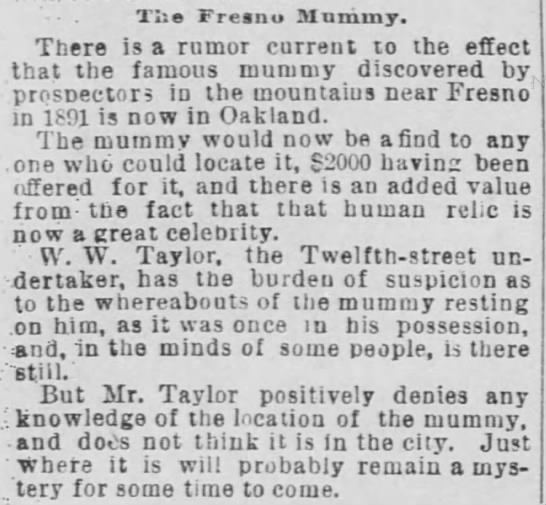 Fresno in 1801 is now in Oakland. The mummy would now be a find to anyone who could locate it, $2000 having been offered for it , and there is an added value from the fact that that human relic is now a great celebrity.

W.W. Taylor, the Twelfth street undertaker, has the burden of suspicion as to the whereabouts of the mummy resting on him, as it was once in his possession, and, in the minds of some people, is there still.

But Mr. Taylor positively denies any knowledge of the location of the mummy, and does not think it is in the city. Just where it is will probably remain a mystery for some time to come. (Researched by Eric Richards)

The mummy which William Elkinton found in Cantau canyon and which the courts decided that he must not keep because it was a human being and most property, has been stolen from the tomb where the health officer had sealed it up, Elkinton had been offered $2000 for it. (Research By Eric Richards)

I am including an old newspaper article from 1890 about a large mummified human found near Fresno, Ca. It states that the body was to be sent to your organization for study. Can you provide any further information on this subject? Thank you very much.

Thank you for your inquiry regarding the remains purported to have been sent to the California Academy of Sciences in 1890.  Unfortunately most of the Academy’s collections, along with associated documentation, burned up in the fire following the 1906 earthquake.  Additionally, after the subsequent Academy building sustained damage in the 1989 earthquake, the decision was made to raze the structure and rebuild, necessitating the moving of all contents.  Thus we have a full inventory of the entire extant collection.  If indeed the remains did arrive at this institution, they are not here now.
I’m sorry we cannot provide more definitive information.  I wish you the best with your research.
Laura Eklund, MA JD