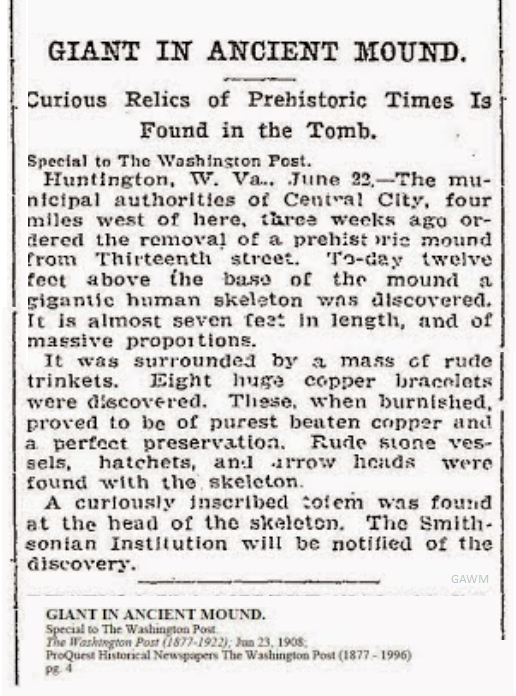 Curious Relics of Prehistoric Times Is Found in the Tomb.

Huntington, W. Va., June 22,– the municipal authorities of Central City, four miles west of here, three weeks ago ordered the removal of a prehistoric mound from Thirteenth street.To-day twelve feet above the base of the mound a gigantic human skeleton was discovered. It is almost seven feet in length, and of massive proportions. 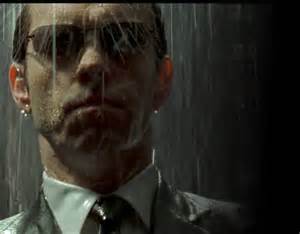 It was surrounded by a mass of rude trinkets.Eight huge copper bracelets were discovered. These, were burnished, proved to be the purest beaten copper and a perfect preservation. Rude stone vessels, hatchets, and arrowheads were found with the skeleton. A curiously inscribed totem was found at the head of the skeleton. The Smithsonian Institution will be notified of the discovery. 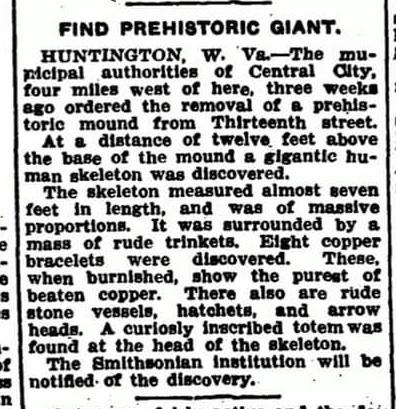 WEST VIRGINIA – An ancient Giant seven feet tall with massive bone proportions discovered within a large burial mound. The Giant wore the purest of copper bracelets and had a curiously inscribed totem at his head.

We at GAWM do not have any desire to direct people to a Smithsonian conspiracy. We do recognize the extreme bias of evolutionism as a whole by its seemingly fanatical defenders. Where the Smithsonian is involved, it will be recognized here.

Here’s the transcription from the June 23, 1908 edition of the Huntington Dispatch:

Yesterday afternoon a most interesting find was made by workingmen engaged in removing the mound in Thirteenth street, between Madison and Jackson avenues, Central City. Some time ago the authorities decided to remove this obstruction from Thirteenth street, and for several days the work of leveling the mound has gone forward.  Yesterday when at a point twelve feet above the base of the mound, a huge skeleton was discovered. While it was impossible to determine the exact height of the skeleton, it is believed to be near an accurate estimate to state that the owner of the bones stood near seven feet in his moccasins.

That the remains are those of a person of distinction in his tribe is evidenced by the wealth of trinkets which were found in close proximity.  There were about the ankles of the prehistoric chieftain massive copper bracelets, while similar ornaments but of lighter patterns were found in the vicinity of the wrists. When the mold was burnished from the trinkets it was found that they were of the finest type of beaten copper and were in a perfect state of preservation.  Quantities of beads, arrow heads and stone hatchets were also discovered.  The copper bracelets are in the possession of J.V. Fetty, of Central City.

News of the discovery attracted hundreds of persons to the spot, and scores of relics were carried away by the curious.

The excavators have yet twelve feet to go before the base of the mound is reached, and other interesting discoveries are expected.

Located in Central City, Cabell County on Thirteenth Street between Madison and Jackson Avenues. In modern times 7 footers are extremely rare. There are 1 7′ individual per 2,300,000 people. The Earth’s population is over 7,700,00,000 which means that there is only 3,348 7 footers on our planet. Most of the 7 footers are because of Acromegally and Gigantism, which does not account for healthy 7 footers. So in the past there is an extremely higher ratio of 7 footers with a much lower population.