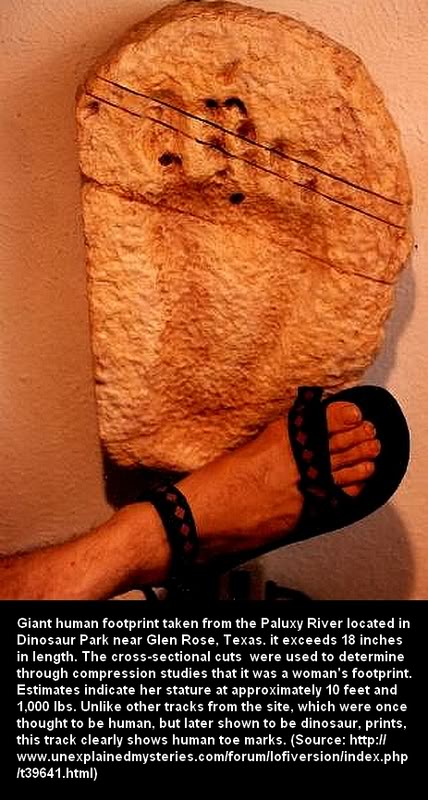 Giant Human footprint taken from the Paluxy River located in Dinosaur Park located in Dinosaur Park near Glen Rose, Texas. It exceeds 18 inches in length. The cross-sectional cuts were used to determine through compression studies that it was a woman’s footprint. Estimate indicates her stature is approximately 10 feet and 1,000 lbs. Unlike other tracks from the site, which were once thought to be human but later shown to be dinosaur. prints. this track clearly shows human toe marks. (Source:http://www.unexplainedmysteries.com/forum/lofiversion/index.php/t39641.html0

Since the track had been removed many years ago from the river, the original site needed to be found.  This was done by following leads from Glen Rose ” old timers” who provided clues as to its original location.  After several days of searching a stratum exposed by Cross Branch appeared to match the Burdick Tracks matrix (ivory tan color; fine grained, crystalline calcite inclusions).  A lapidary expert cut a thin slice from both the Burdick Track and the Cross Branch stratum.  It was a match.

Cordell VanHuse, Dallas lapidary expert, did cross sectioning of the track.  Cutting across the heel section revealed the structures within the rock follows the contour of the heel.  The cross section of the toe area shows clear pressure lines following the contour of the toes.  This track could not have been carved and still contain these features.  The Burdick Track is 6 ½ inches wide and 14 inches long.  This width of a footprint is not inconsistent in size with those individuals who habitually go barefoot.  The length of the footprint would indicate that the person might have been around 7 feet tall.

The Creation Evidence Museum’s team has uncovered over 80 human footprints “in situ” among the dinosaur footprints on the Paluxy River.  The Burdick footprint, found many years ago, is a pristine example.