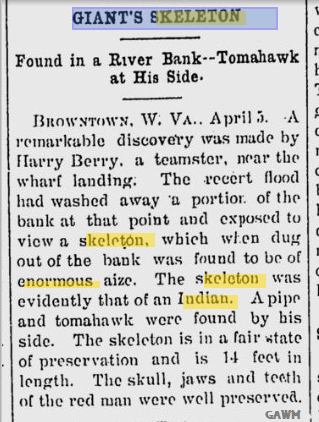 _
Browntown, W. Va., April 5. A remarkable discovery was made by Harry Berry, a teamster, near the wharf landing. The recent flood had washed away a portion of the bank at that point and exposed to view a skeleton, which when dug out of the bank was found to be of enormous size. The skeleton was evidently that of an Indian. A pipe and Tomahawk were found by his side. The skeleton was in a fair state of preservation and is 14 feet in length. The skull jaws and teeth of the red man were well preserved.

Three weeks ago the municipal authorities
of Central City, near Huntington,
this State, began the work of
removing a prehistoric mound located
in Madison avenue. On Monday, when
at a distance of 12 feet from the base
of the mound the excavavators found
a partly preserved skeleton, surrounded
by a wall of rude trinkets. The
skeleton measured six feet eight inches
in length and was of massive proportions.
The skull, the ribs and all the
larger bones of the limbs were in almost
perfect ptate of preservation.
Near the feet and at a position presumably
marking the resting places of the
limbs were found heavy bracelets and
after the mold was burnished from the
trinkets it was found that they were
of the purest beaten copper. Eight
of these bracelets were discovered.
There was also found a curiously in>
scribed piece of partly petrified wood,
believed to be hickory. Local scholars
who have examined this find, believe
that the inscription marks the
totem legend of some tribe long since
departed. There were also found a
number of arrow heads and 6tonc
hatchets.