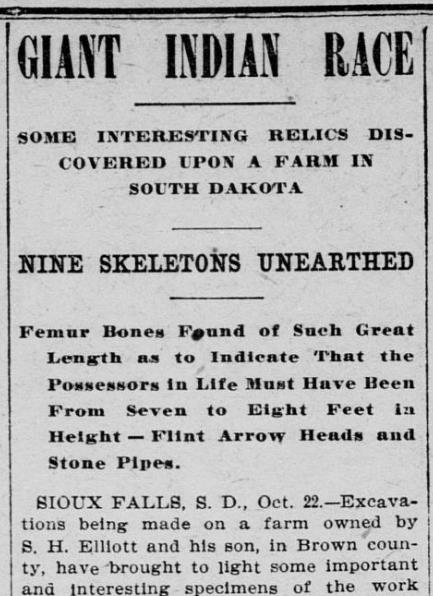 Some Interesting Relics Discovered on a farm in South Dakota

Femur Bones Found at Such Great Length as to Indicate That the Possessors in Life Must Have Been From Seven to Eight Feet in Height – Flint Arrow Heads and Stone Pipes.

Sioux Falls, S. D., Oct. 22. – Excavations being made on a farm owned by S.H. Elliott and his son, in Brown county, have brought to light some important and interesting specimens of the work- 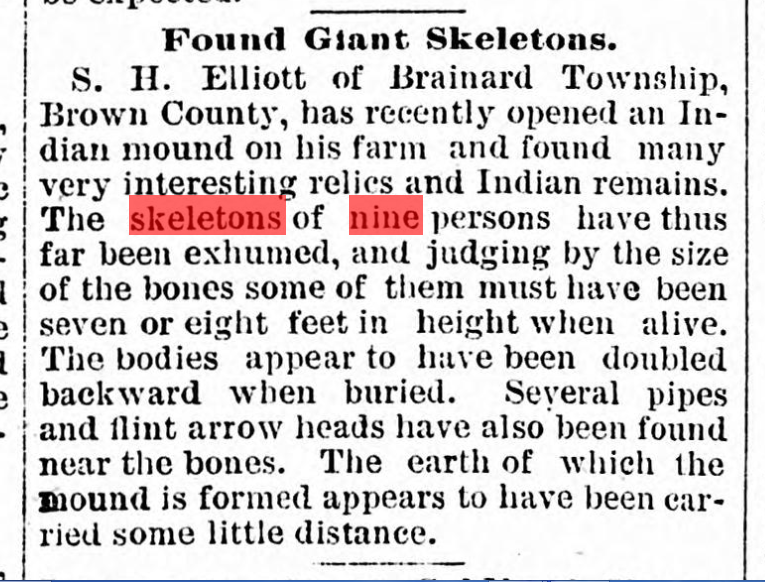 S. H. Elliott of Brainard Township, Brown County, has recently opened an Indian mound on his farm and found many very interesting relics and Indian remains.

The skeletons of nine persons have thus far been exhumed, and judging by the size of the bones some of them must have been seven or eight feet in height when alive.

The bodies appear to have been doubled backward when buried. Several pipes and flint arrow heads have also been found near the bones. The earth of which the mound is formed appears to have been carried some little distance.

There are several types of pituitary gland dysfunctions that could cause an individual to be in the seven to eight feet range. Rare cases of Acromegaly or Gigantism are caused by pituitary tumors that cause the liver to secret GH growth hormones. Sometmes tumors from other organs can also secrete GH. Robert Wadlow who was a victim of this type of disease died at a very young age. These skeletons that were found in SD are not an isolated decrepit like Wadlow. These were healthy individuals mature in stature. This was the norm not an isolated incident. I am reminding you that there are nine skeletons of great size.