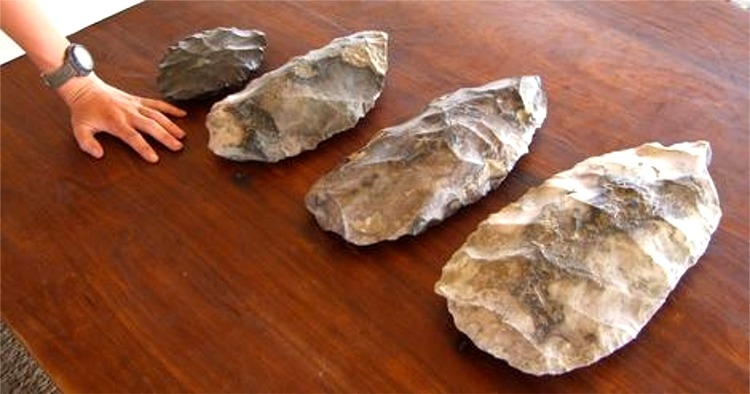 BELOW: A MAN HOLDS ONE OF THE LARGEST OF THE AFRICAN AXES.

A giant African lake basin is providing information about possible migration routes and hunting practices of early humans in the Middle and Late Stone Age periods, between 150,000 and 10,000 years ago.

Oxford University researchers have unearthed new evidence from the lake basin in Botswana that suggests that the region was once much drier and wetter than it is today.

They have documented thousands of stone tools on the lake bed, which sheds new light on how humans in Africa adapted to several substantial climate change events during the period that coincided with the last Ice Age in Europe.

Researchers from the School of Geography and the Environment at the University of Oxford are surveying the now-dry basin of Lake Makgadikgadi in the Kalahari Desert, which at 66,000 square kilometres is about the same size of present day Lake Victoria.

Their research was prompted by the discovery of the first of what are believed to be the world’s largest stone tools on the bed of the lake. Although the first find was made in the 1990s, the discovery of four giant axes has not been scientifically reported until now. Four giant stone hand axes, measuring over 30 cm long and of uncertain age, were recovered from the lake basin.

Equally remarkable is that the dry lake floor where they were found is also littered with tens of thousands of other smaller stone-age tools and flakes, the researchers report.

Professor David Thomas, Head of the School of Geography and the Environment at the University of Oxford, said: ‘Many of the tools were found on the dry lake floor, not around its edge, which challenges the view that big lakes were only attractive to humans when they were full of water.

‘As water levels in the lake went down, or during times when they fluctuated seasonally, wild animals would have congregated round the resulting watering holes on the lake bed. It’s likely that early human populations would have seen this area as a prolific hunting ground when food resources in the region were more concentrated than at times when the regional climate was wetter and food was more plentiful and the lake was full of water.’

It’s likely that early human populations would have seen this area as a prolific hunting ground when the regional climate was wetter and food was more plentiful.

This work is part of an ongoing project investigating the complex history of major changes in climate in Africa. Co-researcher Dr Sallie Burrough has dated the sediment and shorelines of the lake basin, which has shown that the mega lake was filled with water on multiple occasions in the last 250,000 years. The research team has also investigated islands on the floor of the lake – remnants of former sand dunes – which suggest the region’s climate has also been both windier and markedly drier than it is today.

Professor Thomas said: ‘The interior of southern Africa has usually been seen as being devoid of significant archaeology. Surprisingly, we have found and logged incredibly extensive Middle Stone Age artefacts spread over a vast area of the lake basin.

‘The record the basin is revealing is one of marked human adaptation in the past. Early humans saw the opportunity to use the lake basin when it was not full of water, but at least seasonally dry. It shows that humans have adapted to climate change and variability in a sustained way.’

Many archaeologists believe that equivalent lakes in the North African Sahara desert played an important part in the ‘Out of Africa’ human expansion theory, as the ancestors of all modern humans would have chosen a wet route out of Africa. The new research is the first time that this giant Botswanan lake basin in southern Africa has been the focus of scientific research, and these findings could provide new evidence to support the theory about a hominid migration through and expansion from Africa.

Professor Thomas and Dr Burrough are planning further research into how the lake was formed and how it came and went. They say that the most likely explanation is that sustained periods of greater rainfall in the Angolan Highlands resulted in much greater flow in the Zambezi River, with the water being diverted into the lake basin due to a quirk of geology.

New research, beginning in 2010 and funded by the Leverhulme Trust, will investigate possible links between the lake basin and the Zambezi River, while initial discussions are in hand for setting up a major international geo-archaeologist programme to further unravel the complexities of human-climate-environment interactions in this important and under-researched region.