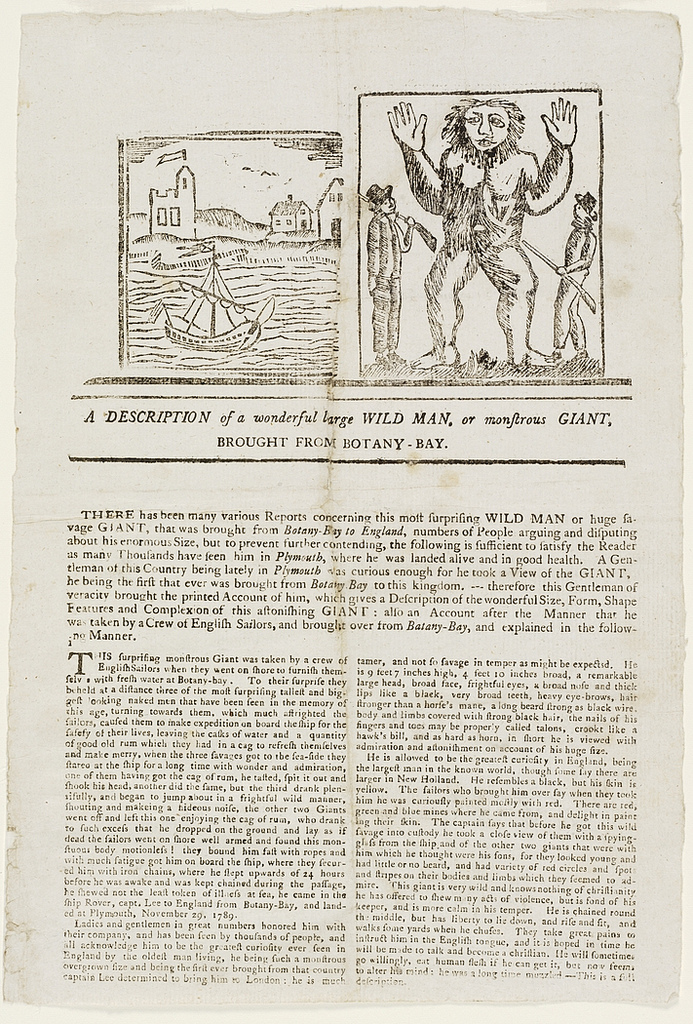 There has been many reports concerning this most surprising WILD MAN or huge savage GIANT, that was brought from Botany Bay to England. numbers of People arguing and disputing about his enormous size, but to prevent further contending, the following is sufficient to satisfy the reader as many thousands have seen him in Plymouth, where he was landed alive and in good health. A gentleman in this country being lately in Plymouth, was curious enough for he took a view of the Giants, he being the first that ever was brought from Botany Bay to this kingdom, – – – therefore this gentleman of veracity brought the printed account of him, which gives a description of the wonderful size, form, shape features and complexion of this astonishing GIANT: also an account after the manner he was taken by a crew of English sailors, and brought over from Botany-Bay, and explained in the following Manner.

when they went on shore to furnish themselves with fresh water at Botany Bay. To their surprise they beheld at a distance three of the most surprising tallest, and biggest looking naked men that have been seen in the memory of this age, turning towards them. which much affrighted the sailors, caused them to make expedition on board the ship for the safety of their lives, leaving the cases of water and a quantity of good old rum which they had in a cag to refresh themselves and make merry. when the three savages got to the sea side they starred at the ship for a long time with wonder and admiration, one of them having got the  cag of rum he cal?ed, spit it out and shook his head, another did the same, but the third drank plentifully, and began to jump about in a frightful wild manner. Shouting and making a hideous noise, the other two giants went off and left this one enjoying the cag of rum. who drank to such excess, that he dropped on the ground and lay as if dead, the sailors went on shore well armed and found this monsterous body motionless! they bound him fast with ropes and with much fatigue got him on board the ship, where they secured him with iron chains, where he slept upwards of 24 hours before he was awake and was kept chained during the passage, he shewed not the least token of illness at sea, he came in the ship Rover capt. Lee to England from Botany Bay, and landed at Plymouth, November 20, 1789.

Ladies and gentlemen in great numbers honored him with their company, and has been seen by thousands of people, and all acknowledge him to be the greatest curiosity ever seen in England by the oldest man living, he bing such a monsterous overgrown size and being the first ever brought from that country Captain Lee determined to bring him to London, he is much tamer, and not so sabage in temper as might be expected. He is 9 feet 7 inches high, 4 feet 10 inches broad, a remarkable large head, broad face, frightful eyes, a broad nose and thick lips like a black, very broad teeth heavy eye brows, hair stronger than a horse’s mane, a long beard thick as black wire, body andlimbs covered with strong black hair, the nails of his fingers and toes may be properly called talons, crookt like a hawk’s bill, and hard as a horn, in short he is viewed with admiration and astonishment on account of his huge size.

He is allowed to be the greatest curiosity in England, being the largest man in the known world though some say there are larger in New Holland. He resembles a black but his skin is yellow. The sailors who brought him over say when they took him he was  curiously painted mostly with red. There was red, green and blue mines where he came from, and delight in painting their skin. The captain says that before he got this wild savage into custody he ook a close view of them with a spying glass from the ship, and of the other two giants that were with him which he thought were his sons, sor they looked young and had little or no beard, and had variety of red circles and spots and stripes on their bodies and limbs which they seem to admire. This giant is very wild and knows nothing of Christianity, he has offered to shew many acts of violence, but is fond of his keeper, and is more calm n his temper. He is chained round the middle. but has liberty to lie down, and rise and sit, and walk some yards when he choses. They take great pains to instruct him in the English tongue, and it is hoped in time he will be made to talk and become a Christian. He will sometimes go willingly, wat human flesh if he can get it, but now seems to alter his mind: he was a long time muzzled. -This is a full description.’ 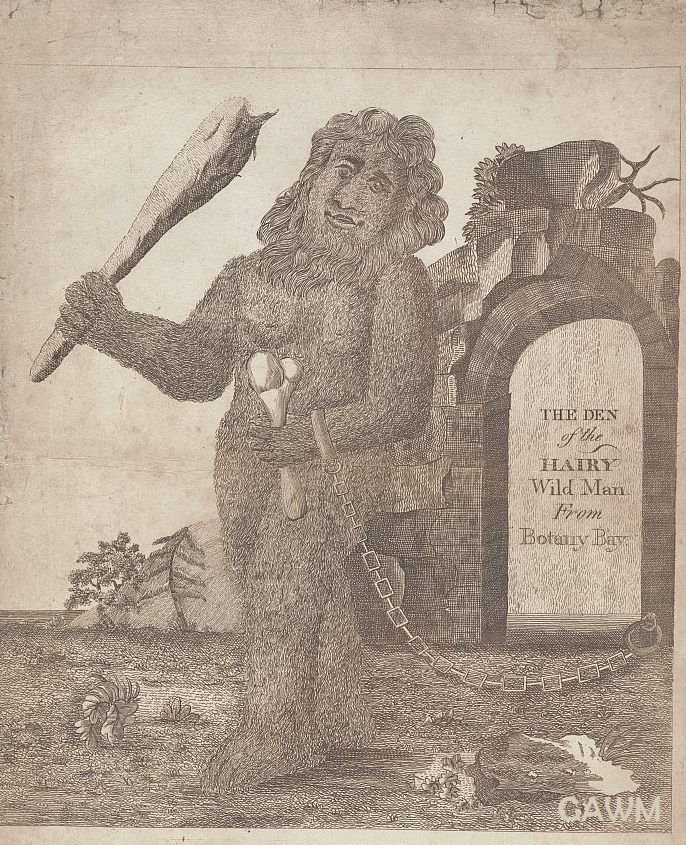 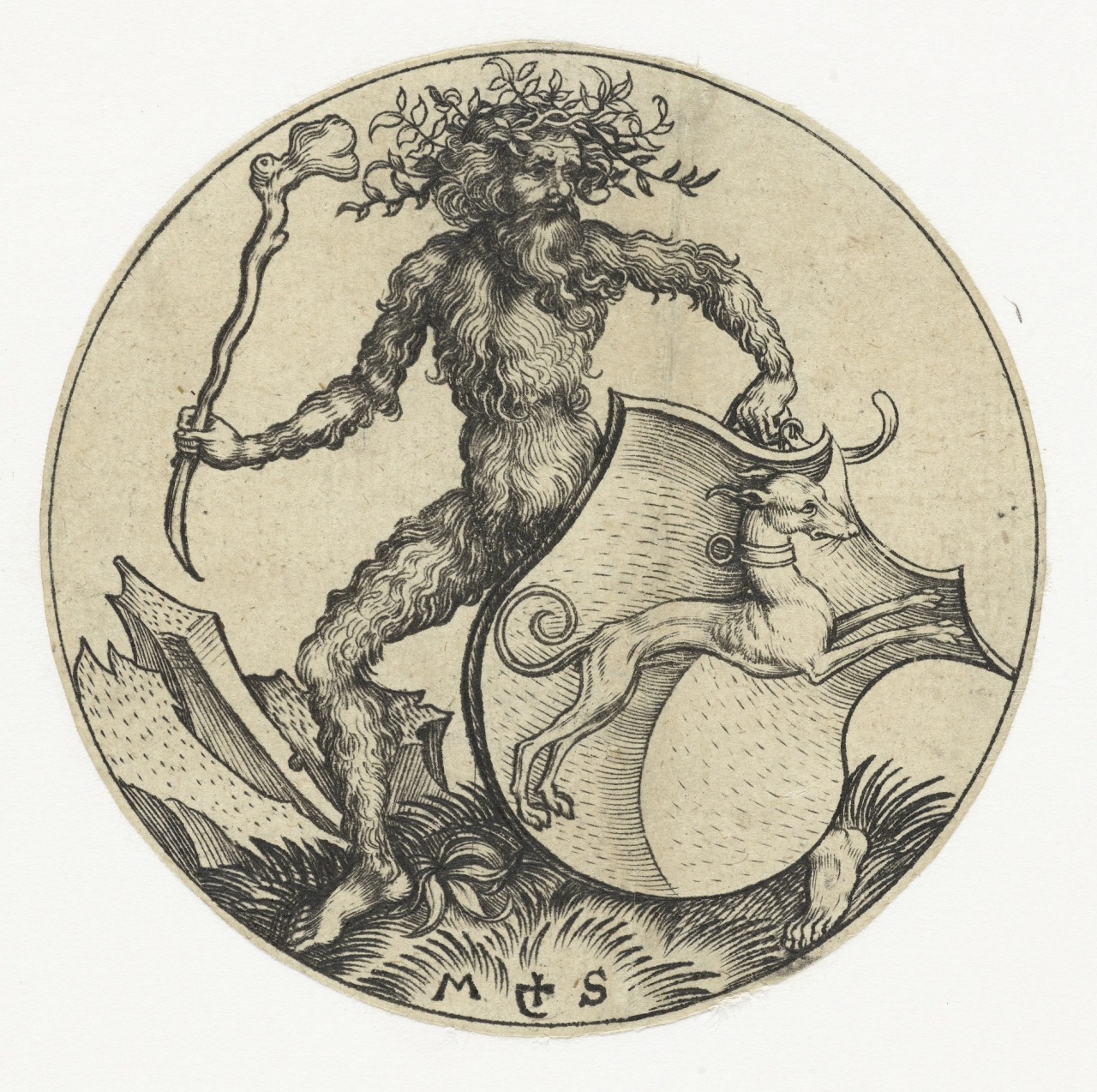