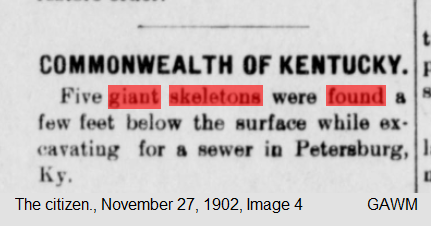 Five giant skeletons were found a few feet below the surface while excavating for a sewer in Petersburg, Ky. Boone County.

There is a second site:

There is another location called Petersburg in Kentucky. It equally could be the site of these five giant skeletons This one is locate in Woodsford county. It would be interesting to know if this was the site, because this Petersburg contains the Creation Museum, operated by the apologetics ministry Answers in Genesis.

Petersburg is located at the site of Tanner’s Station, an outpost founded before 1790.