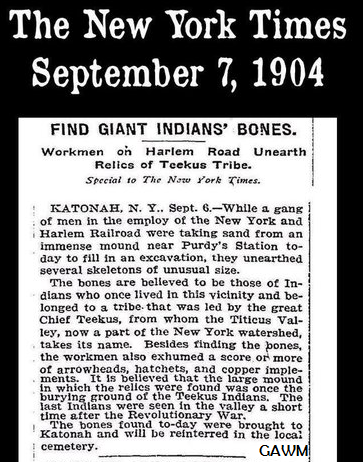 ATONAH, N.Y., Sept. 6. — While a gang of men in the employ of the New York and Harlem Railroad were taking sand from an immense mound near Purdy’s Station to-day to fill in an excavation, they unearthed several skeletons of unusual size.

The bones are believed to be those of Indians who once lived in this vicinity and belonged to a tribe that was led by the great Chief Teekus, from home the Titicus Valley, now a part of the New York watershed, takes its name. Besides finding the bones, the workmen also exhumed a score or more of arrowheads, hatchets, and copper implements. It is believed that the large mound in which the relics were found were once the burying ground of the Teekus Indians. The last indians wer seen in the valley a short time after the Revolutionary War. The bones found today were brought to Katonah and will be reinterred in the local cemetery.