Bones of an 8 foot tall giant Lombardy. (H e was too large for his 2.4 meter coffin).

The skeleton of the Giant “Rodchis” was excavated in 1976-78 at the Castello di Trezzo d’Adda in Italy. This giant was of the royal lineage of the giant king Poto of Lombardy circa 700 AD. The skeleton was in fact buried in a coffin 2.4 m long but the legs were bent to accomodate his height – -He was around 2.5 m tall (8 feet 3). The remains found on site are kept in the archaeological museum in Milan, but the bones are not visible to the public.

This signet ring was part of a group of objects buried with a man from the Longobard aristocracy. It is an important finding in that it helps reconstruct the roots of Lombard civilization. It was found at Trezzo sull’Adda (near Milan), and it is now conserved at Milan’s Archaeological Museum. It is made in gold, with engraved decoration, and it features a bearded man’s face, presumably the king or another prominent figure in the Longobard kingdom. It belonged to a person authorized to sign and seal deeds. The gesture made by the figure was typical of emperors and Roman commanders when encouraging troops. Around the face, there is an inscription referring to the owner of the ring, and, on the reverse side, his title: “Rodchis V. Il.”.

The photos shows a tibia that is fully one third longer than a normal Roman man’s.

The length of the tibia based on the 7 Centimeter ruler, would have been 50 cm long, or nearly 20 inches.

I think the man was more like, over seven feet tall and Nat Geo is under-reporting his stature. A tibia of 50 cm would belong to a man more on the order of 7 feet to 7 feet 3 inches.
[link to news.nationalgeographic.com] 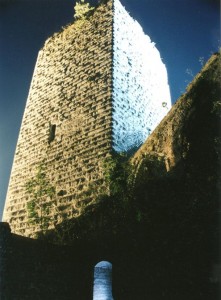 “During the guided tour, which lasts about two hours, you can visit a small but comprehensive archaeological museum (which holds the important Tomb of the Giant of lombard), the evocative ruins of a garden, the impressive underground and the tower with the its steps suspended in air.
The castle is open on Sundays and public holidays from 14.30 to 18.30, from March to October. In the summer months you can also walk among the ruins in a charming nocturnal visit. The tours cost € 4, free access to the park instead.” 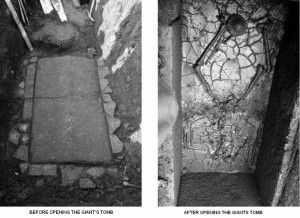 It is important to note that this is a RECENT FIND, as some skeptics misplace their loyalty to less capable, less reliable hands in modern times.

Proofs for giants will continue and i as well as others will be there to bring these exciting examples of greater-anthropology. Whether 7 foot 3 inches to 8 foot tall the modern-tales of mankind being smaller in the past remains to be unseen.