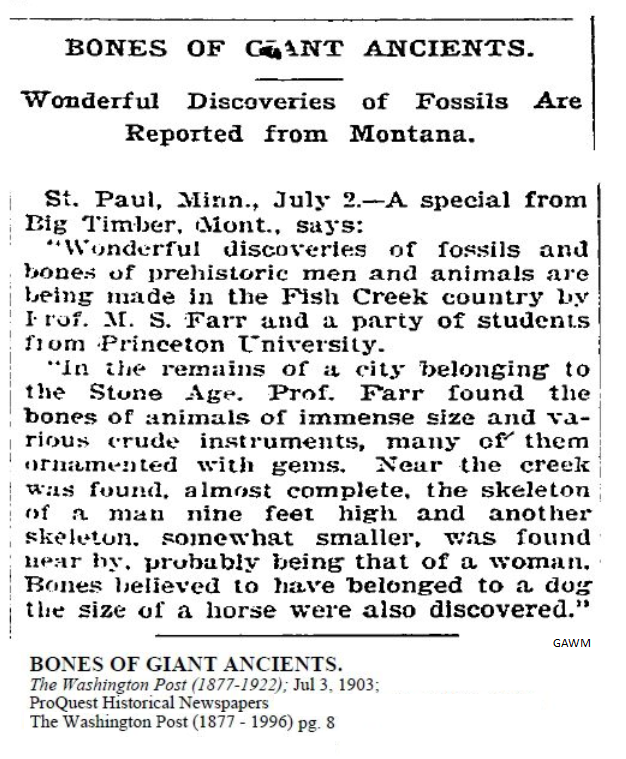 Wonderful Discoveries of Fossils Are Reported from Montana.

St. Paul, Minn., July 2.-A special from Big Timber, Mont., says: “Wonderful discoveries of fossils and bones of prehistoric men and animals are being made in the Fish Creek country by Prof. M. S. Farr and a party of students from Princeton University. Big Timber

“In the remains of a city belonging to the Stone Age, Professor Farr found the bones of animals of immense size and various crude instruments, many of them ornamented with gems. Near the creek was found, almost complete, the skeleton of a man nine feet high and another skeleton somewhat smaller, was found near by, probably being that of a woman. Bones believed to have belonged to a dog the size of a horse were also discovered.”

Not only in the article do we have an example of Greater Ancestor of humans, which meets all the criteria. A nine footer beats Robert Wadlow who is mislabeled as the tallest person ever.” Robert Wadlow was only eight feet 11 1/4/ This article however gives a demonstration of the greater ancestor to domestic dogs. A Irish wolfhound and St Bernards are some of the tallest dos that exist today, however here we have a dog that meets all the criteria as well. The dog is the size of a horse, the million-dollar question is where is it? Why isnt it on display?