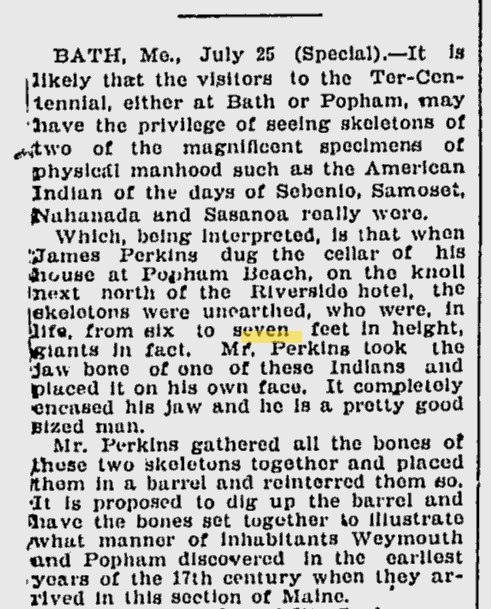 BATH, Me., July 25 (Special). It is likely that the visitors to the Ter-Cenntennial, either at Bath or Popham, may have the privilege of seeing skeletons of two of the magnificent specimens of physical manhood such as the American Indian of the days of Sebenio, Samoset, Nahanada and Sasanoa really were.

Which being interpreted, is that which James Perkins dug the cellar of his house at Popham Beach, on the knoll next month of the Riverside Hotel, the skeletons were unearthed, who were in life, from six to seven feet in height, giants in fact, Mr Perkins took one of the jawbones of these Indians and placed it on his own face. It completely encased his jaw and he is a pretty good sized man.

Mr. Perkins gathered all the bones of these two skeletons together and placed them in a barrel and reinterred them so. It is proposed to dig up the barrel and have the bones set together to illustrate what manner of inhabitants Weymouth and Popham discovered in the earliest years of the 17th century when they arrived in this section of Maine.

A common find of giant humans looking like it fits anywhere else except for the academic road to man. Seven footers are rare today but, not so much in the past entire tribes and races have been found although this information is unknown to the public.There are no isolated cases, no anomalies of giants just a thorough and complete record in every state from Maine to the California coast, it is the correct view of history, Greater Ancestry.